Respected leader, public servant and advocate for people with disabilities 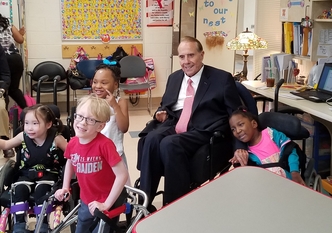 Yesterday, Senator Robert Dole, a genuine, honorable Statesman who dedicated his entire life to serving our great nation and advocating for all people with disabilities passed away at the age of 98. Senator Dole was a giant, in an era where leaders could vehemently disagree about which set of public policies were best for the nation, yet still agree about the need to expand opportunities for all Americans. While our whole country mourns his loss, let us take a moment to remember and recognize the leadership role he took in the drafting and passage of the landmark Americans with Disabilities Act (ADA). Without his true commitment to bipartisanship, the ADA would not have been possible. This piece of legislation has become the gold standard for the international community as countries formulate their own legal principles to uphold the civil rights of people with disabilities.

The Senator’s tireless efforts to ensure our rights continued long after the ADA. He has been outspoken on the need for the U.S. to join over 160 countries worldwide in signing the Convention on the Rights of Persons with Disabilities (CRPD). A WWII veteran, he spent decades personally greeting fellow veterans at the war memorial and speaking publicly on issues concerning our servicemen and women. He was a true American patriot.

The Viscardi Center was honored to have Senator Dole serve as co-chair of the Henry Viscardi Achievement Awards since their 2013 inception and attend the 50th annual Celebrity Sports Night fundraising event. He was delighted to tour the Center and spend time with the Henry Viscardi School kindergartners.

People with disabilities have lost a powerful advocate; our military community has lost a great soldier; America has lost a well-respected leader and public servant who was always able to rise above his own beliefs to bring together two parties in the best interest of the citizens they served. May Senator Dole rest in peace and his legacy live on.