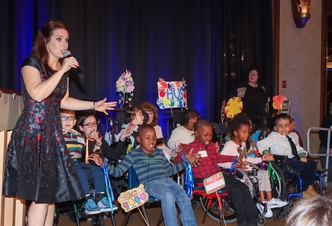 The Viscardi Center’s annual Reach for a Star Luncheon celebrated its 40th Anniversary on November 15, 2022, at the Crest Hollow Country Club. This year’s luncheon happily returned to in-person after being remote for two years due to the pandemic. It was a magical event filled with music and joy.

Chilina Kennedy, the longest-running “Carole” in the history of Broadway’s Beautiful – The Carole King Musical, performed a song set consisting of a preview from the new show she is currently developing that celebrates some of pop music’s greatest hits. A group of Henry Viscardi students attended and joined Ms. Kennedy to sing “You’ve Got A Friend” on stage before more than 200 attendees. Ms. Kennedy was presented with an original piece of artwork created by a Henry Viscardi School student to commemorate the performance.

Over $190,000 was raised to benefit accessible extracurricular programs for children with severe physical disabilities attending the Henry Viscardi School at The Viscardi Center. Many of the students from the Henry Viscardi School depend on special transportation, assistive technology, and life-sustaining medical support throughout the day, and options for socializing outside the classroom are limited. The Reach for a Star Luncheon was founded to raise funds for vital after-school activities, like adapted sports, art, cooking, cheerleading and life skill building overnights, which provide students the means to spend time with friends outside of school, expand their interests, and share new experiences.

This year’s guest speaker was Class of 2013 Viscardi alum, Richard Bedard. Utilizing the knowledge and skills he obtained from the Henry Viscardi School, Richard attended Adelphi University as an undergraduate and is currently pursuing his Ph.D. in Clinical Psychology at Hofstra University. Richard gave an impressive speech in which he shared his experience at the Henry Viscardi School and how it, and the after-school programs made possible through the Luncheon, helped mold him into the accomplished young man he is today. “As difficult as it may seem that Friday Night Rec can move someone to a doctoral program… all these social programs are how I created who I am and who I want to be and to advocate for people who cannot advocate for themselves,” shared Bedard.

About the Henry Viscardi School

The Henry Viscardi School at The Viscardi Center is a New York State supported school that offers parents of children with severe physical disabilities and who often require life-sustaining medical treatment throughout the day, a traditional educational setting option that provides rigorous academics and opportunities for personal growth and leadership development. Its specialized, accessible educational setting provides a fully enriched academic program, a variety of therapies, assistive technology and medical supports to students who may otherwise need to receive instruction in their homes or a hospital.

The Viscardi Center, a network of non-profit organizations based in Albertson, provides a lifespan of services that educate, employ, and empower people with disabilities. Its programs and services include Pre-K through High School education, school-to-work transition services, vocational training, career counseling and placement, digital accessibility services, entrepreneurship, and workforce diversification assistance to children, adolescents, and adults with disabilities and businesses. It was founded in 1952 by Dr. Henry Viscardi, Jr. who himself wore prosthetic legs, served as disability advisor to eight U.S. Presidents, from Franklin D. Roosevelt to Jimmy Carter, and became one of the world’s leading advocates for people with disabilities.