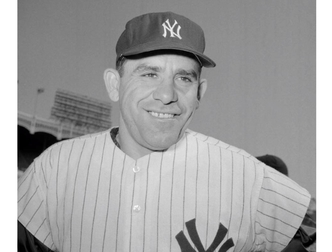 At the age of nine, in an era eons ago, I met Yogi Berra.  He was a favorite of my father, so I knew exactly who he was and that he was admired, talented and funny. Baseball was my sport, and I had fantasies of following my hero, Hank Aaron, into the Hall of Fame after an extraordinary career in right field. I think you know how that went!

Yogi made my father, and the world, laugh every time he spoke. “Ninety percent of this game is half mental.” “No one ever comes to this restaurant any more, it’s too crowded.”  “You can observe a lot just by watching.” “The towels were so thick there, I could hardly close my suitcase. “And, “it’s like deja vue all over again!” He wasn’t even trying to be funny. He was just being himself, a man who grew up in a working class family in St. Louis. He was every man, every player. And, humbly became a superstar.

On a trip to New York City, my father and I were invited into the Yankees clubhouse before a home game in the early Summer of 1960. We weren’t just going for a photo opp in the stands, we were entering the inner sanctum of the perennial World Series winners to meet the players and Manager Casey Stengel as they prepared to go to the dugout and then to the field.  Mantle, Maris, Ford… and Yogi! Only Yogi, was seated on a long couch, jersey shirt unbuttoned, drinking a milkshake and laughing. We shook hands. He was sincerely nice and signed a baseball that the team had just used in warm-up, the quickest gift he could find. I loved it and still have it.

So, what does Yogi Berra and his passing have to do with the disability rights movement? Yogi had immense talent that was not readily apparent until he was given the opportunity to play the game he loved. And, he flourished, becoming a 15-time All-Star, a 3-time American League MVP and a 10-time World Series champion. He was not measured by his appearance, which was not a telegenic one, but by his skill which was exceptional.

He was brilliant, getting full credit for making the hallowed Yankees pitching staff the great success it was, by his own Manager, Casey. He earned his success by helping others be even better. Lesson well noted.

Finally, because the press, and the public, hung on every one of his spoken words, he gave them what we wanted – clever witticisms that were unselfish,  but not humiliating. He and his Yankees became America’s Team first, before the Dallas Cowboys, and he absorbed so much attention that there was little interest in chasing down gossipy stories because there’s only so many column inches and we wanted to hear from Yogi! Our disability movement needs interesting stories that either empathetically focus the world on our issues, or have an extraordinary character that draws them to us and our cause, maybe even both.

My father and I forever loved Yogi, and he has given me much on which to reflect as he leaves us in his 90th year of life. May we be a better, stronger disability movement because of,  yes, Yogi Berra.