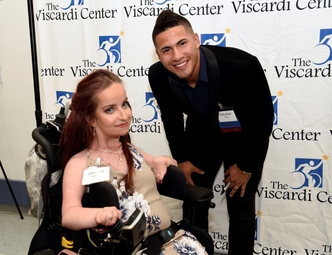 New York Yankees infielder Gleyber Torres stepped out of pinstripes for an evening to attend The Viscardi Center’s premier fundraising event, Celebrity Sports Night, on Thursday, May 16. Torres and over a dozen professional athletes and celebrities signed autographs and posed for photos with attendees to raise vital funds and awareness for life-changing programs and services for people with disabilities.

The 53rd annual event drew in 550 community leaders and philanthropists to The Viscardi Center — the Albertson-based nonprofit dedicated to educating, employing, and empowering children and adults with disabilities. During the dinner program, the Center’s President & CEO, John D. Kemp, unveiled several new initiatives that enhance the organization’s mission, including two opportunities for students at the Henry Viscardi School at The Viscardi Center.

In celebration of the life of John J. Gutleber, who was the President and CEO of Castagna Realty Company and served on The Viscardi Center’s Board of Directors for more than 25 years, Kemp announced a complete renovation of the Center’s pool, locker rooms, and surrounding area that is underway. When reopened, it will be known as The John J. Gutleber Aquatic Center, dedicated by Castagna Realty Company. Kemp also shared that a generous donation of $900,000 to Adelphi University has established a scholarship fund for graduates of the Henry Viscardi School in memory of Gutleber. The Adelphi University Board of Trustees will match the annual payout of the endowment in perpetuity, doubling the impact of this transformative scholarship.

“John was a Trustee Emeritus of Adelphi University, and this scholarship is the realization of his vision to help Viscardi students continue their education,” he said. “With both the pool renovation and the Adelphi scholarship, his legacy at The Viscardi Center and at Adelphi University will be indelible, substantial, and incredibly meaningful — improving the lives of Henry Viscardi School students now and in the future.”

Debbie Cuevas, mother to 15-year-old student, Dylan, shared her story about having a medically fragile child with a severe disability and entrusting his care and academic success to the Henry Viscardi School. Dylan will complete tenth grade this spring as a National Honor Society inductee.

“Their disability should not define them and hold them back,” Cuevas said about her son and his peers at the Henry Viscardi School. “People like you and I are the ones who must advocate so they can constantly move forward and follow their dreams.”

Former New York Ranger Ron Duguay continued the evening by introducing a video segment featuring three individuals with disabilities who, with access to the Center’s programs, are accomplishing their educational, professional, and personal goals. An award presentation to native Long Islander, Ironman triathlete and Paralympian Sarah Reinertsen concluded the night.

The Viscardi Center will host its 54th annual Celebrity Sports Night on May 14, 2020.

About The Viscardi Center
Founded by Dr. Henry Viscardi, Jr., who served as disability advisor to eight U.S. Presidents and became one of the world’s leading advocates, The Viscardi Center educates, employs and empowers people with disabilities. It provides Pre-K through High School education (up to age 21), school-to-work youth transition services, vocational training, career counseling and employment placement, assistive technology, and adapted driver education to children, adolescents, and adults with a wide variety of disabilities. The Viscardi Center also assists businesses in diversifying their workforces and developing and advancing disability inclusive cultures in their workplaces.