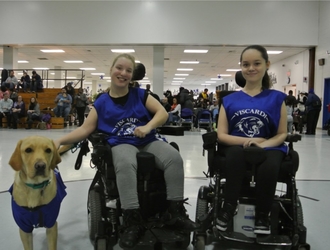 You could feel the energy, excitement and school spirit in the gymnasium of the Henry Viscardi School at The Viscardi Center, which serves children with severe physical disabilities, during the School’s annual Wheelchair Basketball Sportsmanship Tournament on December 6, 2014. View snapshots from the Tournament.

This tournament, sponsored by the Lisa Beth Gerstman Foundation, is one of the few times the students have the opportunity to compete with peers from other schools. The day included highly competitive games against the Westchester School for Special Children and UCP Westchester, as well as one between Henry Viscardi School Alumni and the School’s Varsity team. The Viscardi Cougars Varsity team were awarded the tournament’s first place trophy. The standings were determined by a tie-breaker, least points scored against.

The Henry Viscardi School (HVS) Cubbies, made up of elementary students, won their game, by a score of 44-30, beating Team HVS. Team HVS included staff as well as family and friends of the students. The HVS Varsity team beat Westchester School for Special Children, 30-26, in a “nail biter.” Harut, a high school student at HVS who is considering a career as a music producer, said, “There is a lot of camaraderie with your friends during the tournament. It’s a great way to bond and a lot of the kids really love basketball.”

The HVS JV team beat UCP Westchester, 32-26, but lost later on in the day by three baskets to Westchester School for Special Children. Savannah, a 9th grader at HVS playing in her first tournament said it was fun and a great experience.

The HVS Alumni showed they still hadn’t lost their touch when they handed the HVS Varsity team a loss, just winning by a score of 28-26.

During the tournament each year, a Viscardi player is chosen to receive the Scott “Bubba” Pollack Award. This Award is named after a former captain of the Viscardi basketball team who passed away and is given to a player on the team who demonstrates sportsmanship and character on and off the court. This year’s recipient was Jalen, a senior, was overcome with excitement when the announcement was made by Joe Slaninka, Head Basketball Coach at Henry Viscardi School. A little surprised he was selected, Jalen said he loved receiving it.

Emma, a 10th grader at Viscardi who brought her service dog, Ellis, dressed in a basketball jersey, said she finds playing the tournament every year very inspiring and that it brings out the competitor in every one.

About The Viscardi Center: Founded by Dr. Henry Viscardi, Jr., who served as disability advisor to eight U.S. Presidents and became one of the world’s leading advocates, The Viscardi Center educates, employs and empowers children and adults with disabilities. It provides Pre-K through High School education, school-to-work transition services, vocational training, career counseling and placement, adapted driver education, assistive technology and workforce diversification assistance to children, adolescents and adults with disabilities, and businesses.