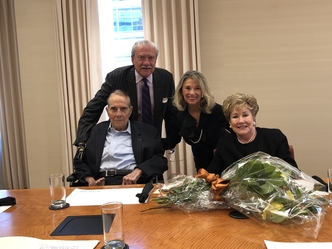 John and Sam Kemp with Senators Bob and Elizabeth Dole at Alston & Bird in Washington, D.C.

During an intimate gathering at the Washington, D.C. office of Alston & Bird on October 30, The Viscardi Center’s President & CEO John D. Kemp and his wife, Sam, honored veteran and disability rights leader Senator Robert Dole for a lifetime of public service and his ongoing dedication to recognizing innovative individuals with disabilities from around the globe as Co-Chair of The Viscardi Center’s Henry Viscardi Achievement Awards. Since its inception in 2013, the Awards have celebrated over 50 diverse men and women from a wide range of industries spanning over a dozen countries.

About The Viscardi Center
Founded by Dr. Henry Viscardi, Jr., who served as disability advisor to eight U.S. Presidents and became one of the world’s leading advocates, The Viscardi Center educates, employs and empowers people with disabilities. It provides K-12 education (up to age 21), school-to-work youth transition services, vocational training, career counseling and employment placement, assistive technology, and adapted driver education to children, adolescents, and adults with a wide variety of disabilities. The Viscardi Center also assists businesses in diversifying their workforces and developing and advancing inclusive cultures in their workplaces.