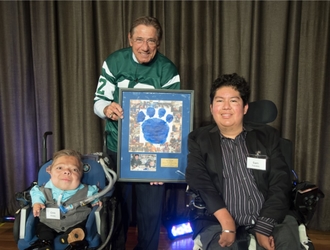 For over four decades, sports legends and celebrities have gathered at The Viscardi Center’s Annual Celebrity Sports Night to help raise vital funds for its programs and services that educate, employ and empower children, adolescents and adults with disabilities. This year’s event, held on May 14, 2015, was presented by DiversityInc and chaired by John A. Danzi, Principal, Long Island Hotels. View the Sports Night photo gallery.

A crowd favorite each year is an original performance featuring students from the Henry Viscardi School at The Viscardi Center and athletes, produced by Olympic Figure Skating Champion JoJo Starbuck. This year’s show, Glee Wiz! – a take-off of the Emmy Award winning show Glee – had a refreshing, new twist… all of the honorees and guests had a role in the play. And, what good sports, and actors, they were!

First to the stage was the Sport Night honoree, Luke Visconti, CEO and Founder of DiversityInc, being recognized for the positive impact he has had on improving the employment opportunities for people with disabilities and diversifying workforces at top companies around the country. While sharing his own personal story of acquiring a disability after having a stroke last year, Visconti reflected on the past year, “sometimes a person has to overcome setbacks to really get ahead,” and gave heartfelt praise for The Viscardi Center’s work.

Victor Calise, Commissioner of the New York City Mayor’s Office for People with Disabilities, received the Roy Campanella Award which is bestowed each year. Calise was a member of the U.S. Sled Hockey team at the 1998 Japan Paralympics. During his stage appearance, Calise described his office’s efforts on behalf of 800,000 city residents with disabilities, “Our city helps create opportunities for people with disabilities to live, love, work and learn in their communities.” Upon receiving the Award, he shared that his father is a Brooklyn Dodger fan and had many great things to say about Campanella as a player so it was a true honor to receive the Award. He also invited the audience to participate in the City’s first disability pride parade on July 12 in celebration of the 25th anniversary of the passage of the Americans with Disabilities Act (ADA).

Before receiving the Sportsman of the Year Award, Clark Gillies, NHL Hall of Famer and former New York Islander, participated in a skit that included the annual medal ceremony for the Viscardi Cougars wheelchair basketball team seniors. “You see these kids here tonight, they’re having the time of their life,” Gillies pointed out during his remarks. Gillies has attended many Sports Night events over the years.

Robin Hayes, President & CEO of JetBlue Airways, accepted a Corporate Excellence in Disability Best Practices Award. The Viscardi Center partners with JetBlue on a variety of activities that continue to educate and train its staff on disability related topics. Its employees have also participated in career fairs and volunteer days where they have conducted mock interviews, reviewed resumes and provided tips to the Center’s vocational training and employment placement services participants to further prepare them for job searches. In June, JetBlue will host students from Henry Viscardi School, participating in its aviation curriculum, for an exclusive airport and travel experience. During his cameo, Hayes explained, “Tonight, I’m here because giving back in our hometown is very important to us at JetBlue, and so is our mission to Inspire Humanity… We want JetBlue to be the most accessible airline for our Customers, our Employees and for people who are seeking jobs, too.” He further noted that he’d like to see some of the Viscardi students and program participants working at JetBlue in the future.

John D. Kemp, President & CEO of The Viscardi Center, took the stage just before the show’s finale. In his remarks, he highlighted The Viscardi Center’s recent accomplishments and commitment to helping the children and adults with disabilities it serves reach their goals. “We believe every child and adult with a disability deserves a great life… a life of their own choosing,” said Kemp. He also proudly noted that graduates of Henry Viscardi School, as well as adolescent and adult program participants, leave the Center empowered, tenacious and believing their life has value and that they rightfully belong in all aspects of life. “The Viscardi way is to set our sights high, to pursue our dreams with vigor and when we’ve reached them, we make new plans, set new goals, pursue new job opportunities and serve new people,” concluded Kemp.

NFL great Joe Namath, attending the event for his third time, once again brought his charm and sense of humor to the stage, appearing as himself in the show. The evening’s closing number featured an energizing rendition of “Don’t Stop Believing” which brought the audience to its feet.

Each of the honorees and special guests were presented with framed artwork created by students from the Henry Viscardi School.