Dr. Rosa, most recently Assistant Vice Chancellor for Student Inclusion Initiatives at CUNY, will start his new role at the Center on January 1. 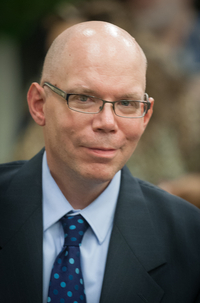 The Viscardi Center Board of Director’s Chair Russ Cusick announced Dr. Chris Rosa, most recently Assistant Vice Chancellor for Student Inclusion Initiatives, City University of New York (CUNY), has been appointed as the next President and CEO of the Center, effective January 1, 2022. Dr. Rosa will also serve as President of the Henry Viscardi School and Abilities, Inc.

“In our search for the next President and CEO, we were fortunate to meet with and interview an extremely well qualified pool of candidates. A collaborative and visionary leader, Dr. Chris Rosa brings exemplary experience in education, non-profit and advocacy. He will continue the legacy of Dr. Henry Viscardi, Jr. and lead the organizations to new heights,” said Cusick, who also served as the Chair of the search committee. “On behalf of the boards of directors and trustees, we are delighted to welcome him to this paramount position and are prepared to support him in this leadership role.”

“As a lifelong New Yorker with a disability, The Viscardi Center has always loomed large in the formation of my disability rights consciousness and identity,” said Dr. Rosa, a wheelchair-user since age 12, who has Limb-Girdle Muscular Dystrophy. “The prospect of serving as the leader of this historic organization is, at once, humbling and thrilling!”

Dr. Rosa has been a member of the Henry Viscardi School Board of Trustees since 2017, as well as an active member of The Viscardi Center’s Public Affairs Committee. He has served as the Assistant Vice Chancellor for Student Inclusion Initiatives at the City University of New York, the nation’s largest urban public university system, since 2019. In this role, he designed and led programs that promote access, equity, and inclusion for students who have historically under-participated in higher education, including CUNY’s more than 11,000 students with disabilities, 3,200 student veterans, 17,000 LGBTQI students, and over 6,000 undocumented students. Dr. Rosa’s higher education governance includes serving as CUNY’s Interim Vice Chancellor for Student Affairs and the University’s Assistant Dean for Student Affairs. He joined the CUNY Office of Student Affairs in July 2004 after 11 years of student affairs experience at his alma mater, Queens College. While at Queens College, he served as its Director of Services for Students with Disabilities, as Director of its Student Support Services Program, as its 504/ADA Compliance Officer, as its Affirmative Action Officer, and as a Student Disciplinary Officer. At Queens College, he collaborated with the New York City Department of Education’s District 75 to create its Inclusive Higher Education Program.

Dr. Rosa earned his B.A. in Sociology & Philosophy from Queens College in 1989 and his Ph.D. in Sociology from the CUNY Graduate Center in 2001, with a dissertation entitled “Disability Rites: Constructing American Disability Culture”. A lifelong Queens native, Dr. Rosa is deeply engaged in his community, having served as a youth basketball coach in the CYO program at St. Ann’s Roman Catholic Church in Flushing.

About The Viscardi Center
The Viscardi Center, a network of non-profit organizations based in Albertson, provides a lifespan of services that educate, employ, and empower people with disabilities. Its programs and services include Pre-K through High School education, school-to-work transition services, vocational training, career counseling and placement, entrepreneurship and workforce diversification assistance to children, adolescents, and adults with disabilities and businesses. It was founded in 1952 by Dr. Henry Viscardi, Jr. who himself wore prosthetic legs, served as disability advisor to eight U.S. Presidents, from Franklin D. Roosevelt to Jimmy Carter, and became one of the world’s leading advocates for people with disabilities.