Finding a voice at Viscardi. 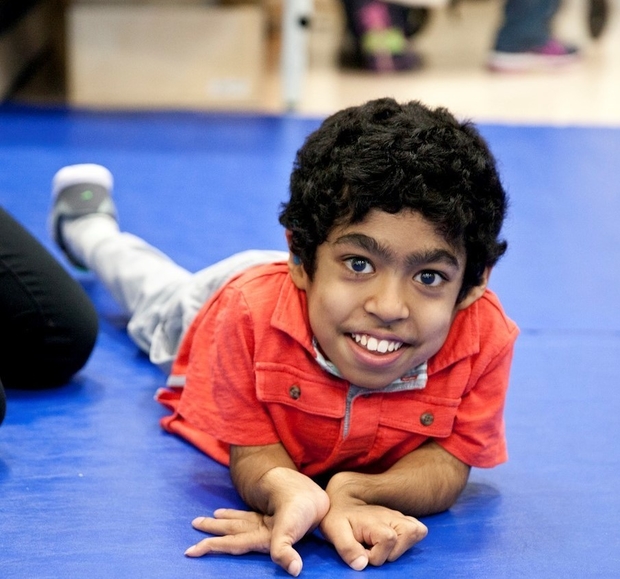 “The Henry Viscardi School has shaped me and helped me become an intelligent and open-minded young adult.”

When Shums started kindergarten at the Henry Viscardi School, he chose not to speak to anyone. Teachers and classmates spoke to him, but he wouldn’t respond back. Deep down, Shums wanted to communicate with others, but he was just too nervous to do so.Then, in fifth grade, something changed. Shums began to open up at school by participating in class and extracurricular activities. As he made friends and got to know everyone around him, he finally became comfortable with the idea of talking. He was ready to be heard.

Jump forward to today, and Shums, now in ninth grade, isn’t shy or at a loss for words. A milestone moment came last year when he delivered a speech to a large audience at the eighth grade “moving up” ceremony as valedictorian.

Shums says that playing on the Viscardi Cougars wheelchair basketball team helped him understand that he had the ability to take control of his dreams.

“When I was younger, I would look at athletes and say to myself ‘I wish I could be like that.’ I thought I could never be that athletic and strong,” he said. “But my basketball coach, Joe Slaninka, made me believe that I could be an athlete despite my disability.”

Under the guidance of Coach Slaninka, Shums has joined the Viscardi Student Ambassadors, a club designed to promote tolerance at local schools. As an Ambassador, he speaks to kids his age about what it’s like to be a teen with a disability. Shums has found that starting candid dialogues about his disability can dispel misconceptions that young people might have about those who are different — a lesson learned at Viscardi.

“The Henry Viscardi School has shaped me and helped me become an intelligent and open-minded young adult,” he said. “This school has also taught me that how others see you is not important, but how you see yourself means everything.”