Developing the tools for long-term employment. 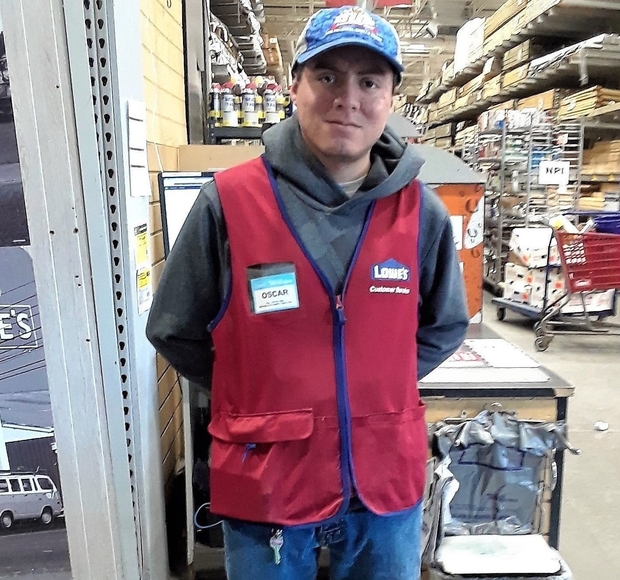 Each time Oscar slips on his red vest and clocks in at Lowe’s Home Improvement in Garden City, he’s determined. This determination shines through as he helps shoppers transport patio furniture into their cars or find the right lighting fixture down one of the store’s sprawling aisles; it’s present as he tracks down online orders and mans the cash register. As Oscar puts it, being a successful loader and sales associate is all about having a positive attitude.

“My favorite section is the tool department, but I know where everything is located in the store,” he said. “When I’m at my job, I work hard and try my best.”

This sense of determination led Oscar to transform what began as a temporary gig in the garden department into a permanent position. After proving his dedication as a seasonal employee, he approached the store manager about keeping his job long term. Oscar’s self-advocacy paid off — as of today, he’s been employed at Lowe’s for over a year.

The path to employment wasn’t always so clear. For years, Oscar struggled to find a job that matched his needs as a young adult with a disability. Then, while volunteering as a file clerk at Nassau University Medical Center, he and his family tried something different. Oscar enrolled in Viscardi’s Work-Readiness Program, where he strengthened social and customer service skills at its on-site clothing boutique. He emerged six months later with a refined resume and renewed confidence in his abilities.

To boost his confidence during the interview process, he then sought assistance from a Viscardi Job Developer, who coached him through mock interviews and connected him to open positions that suited his interests. Everything finally came together when Oscar met with the hiring manager at Lowe’s. He nailed the interview and landed the job.

Oscar’s future is brimming with possibilities. He recently received his driver’s license and plans to purchase a car for commuting to work. On the job, he continues to grow his skills. He recently experienced a personal milestone when he prevented a distracted customer’s young daughter from running into a busy street in front of the store. Coworkers nicknamed him a “Lowe’s Hero” for saving the day, but Oscar remains humble about preventing the potential accident. According to Oscar, he was simply doing his best.