This Viscardi alumna proves it’s never too late to pursue your goals. 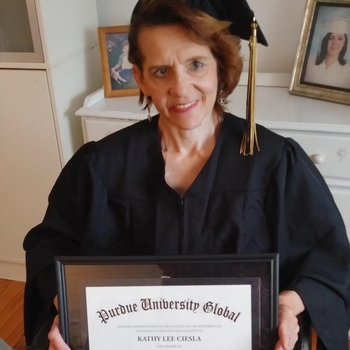 Face your battles head-on. If people say you can’t do something you want to do, simply say
‘I will do it.'”

What am I going to do with the rest of my life? That’s the question Viscardi alumna Kathy Ciesla began asking herself after raising and caring for the health of two children, her pride and joy, into adulthood. With her children grown, she put the focus back on herself and began discovering the answer to that question—by pursuing an online degree at Purdue Global University at the age of 48.

For Kathy, who recently received a bachelor’s degree in Health and Human Services, returning to school later in life is one of her greatest accomplishments, and one fueled by a passion for helping others. She feels a sense of satisfaction after making progress on personal goals that once felt so out of reach.

“Fulfilling my dream was a great triumph for me,” she says. “It shows that if you stay positive, you can jump over any hurdle in your path.”

Even as a student at the Henry Viscardi School at The Viscardi Center, she had a calling to make a difference—a calling that solidified after getting acquainted with founder Dr. Henry Viscardi, Jr. and his dedication to empowering young people with disabilities. She later used the skills and confidence from her school days to become deeply involved in disability-related issues in the New York area serving as a member of the MTA Able Ride Paratransit Oversite Committee, where she advocated for the accessibility needs of her peers.

Since graduating from Purdue last spring, Kathy has grappled with the impacts of the pandemic, including low employment opportunities, as she builds a career to match her new degree. Despite current obstacles, she’s resolute about applying the knowledge acquired from her degree program to a role in which she can assist other individuals with disabilities connect with life-sustaining services.

Kathy says she looks forward to the future, knowing it’s never too late to achieve her dreams. Her words of advice for anyone dealing with challenges: “Face your battles head-on. If people say you can’t do something you want to do, simply say ‘I will do it.’”