Training for the NYC Marathon is just one way this young man is involved in his community. 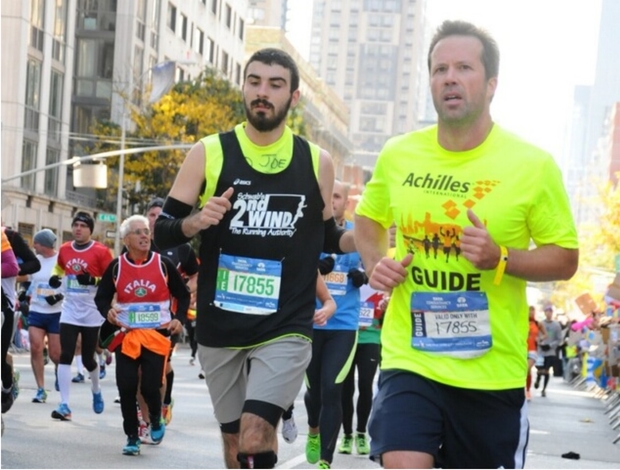 While most would dread the grueling training needed to run 26 miles through the five boroughs during the New York City Marathon on November 1, 2015, Joseph relishes and takes pride in it. For Joe, training for and running in marathons is one of his favorite things to do. When Joe ties his sneakers and hits the streets in a few weeks, he’ll be competing in his third major race in two years, having already completed the 2014 NYC Marathon and its counterpart in Boston.

“I like training hard with my coaches,” said Joe when asked about the commitment needed to complete the marathon. A student in the Abilities, Inc. at The Viscardi Center Youth Transition Services program, he is seemingly always on the go. An active participant in classroom activities, Joe is on the program’s snack sales team as part of its in-school business enterprise and partakes in a wide range of community service projects. He enthusiastically volunteers at several of The Viscardi Center’s annual fundraising events. Joe has escorted athletes at its Celebrity Sports Night and greeted golfers at its Golf Outing. He’s also becoming quite a cook thanks to spending time each week in the Independent Living House on the Viscardi campus, where he is learning basic housekeeping and living skills.

Upon graduation from high school, Joe would like to be employed in his local community. He is preparing for the transition from school to work through various community-based worksite experiences. Each week, Joe spends time stocking shelves in a neighborhood grocery store, assists with placing returned merchandise back in the aisles at a home improvement center, and caring for some four-legged friends at a boutique dog hotel.

In addition to running, Joe enjoys watching Alex Rodriguez and the Yankees and playing video games. He also enjoys traveling with his family and recently took a safari in Africa. Right now, his family, friends, and Viscardi instructors look forward to cheering him on from the sidelines and greeting him at the marathon’s finish line.