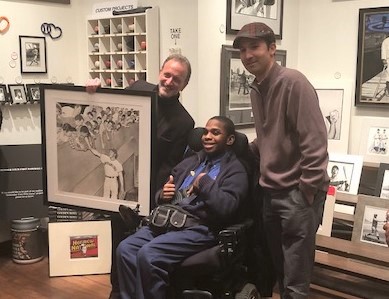 “Getting involved in charity changes the way you see yourself and others.”

Ever since his father brought him to Yankee Stadium at the age of three, Jay Goldberg has been hooked on baseball. Goldberg’s love for the sport gave way to a 15-year career as a sports agent representing top athletes, and later sparked his entrepreneurial spirit in the form of the Bergino Baseball Clubhouse, a memorabilia shop that he owns and curates in Greenwich Village.

In 2015, baseball led to an unexpected passion — philanthropy. While Goldberg was acquainted with dozens of nonprofits in the metropolitan area through his high-profile contacts in the majors, he developed a personal connection to a cause when he toured The Viscardi Center campus on the urging of former New York Mets outfielder Mookie Wilson. Like that first time at the ballpark, he had found a new calling.

“Getting involved in charity changes the way you see yourself and others,” he said. “Most of us get up every morning without thinking about the challenges that other people face every day. After meeting students with disabilities at Viscardi, it made me consider things that had never before entered my mind.”

Moved by the optimism shared by Viscardi students and staff, Goldberg has used the Clubhouse as a platform to raise awareness for accessible education and employment for children and adults with disabilities. He donates valuable sports collectibles to be auctioned at Viscardi’s annual Celebrity Sports Night, regularly travels to Long Island to support fundraisers, and invites Viscardi student ambassadors to share their success stories at Clubhouse events.

Going forward, Goldberg hopes to continue combining his enthusiasm for baseball and philanthropy. The Bergino Baseball Clubhouse recently held Baseball in Black & White: The Watercolors of James Fiorentino, an art show featuring original paintings of prominent figures throughout baseball history, in benefit of Viscardi. Another date will be announced in the spring.