How a second chance at education transformed her life. 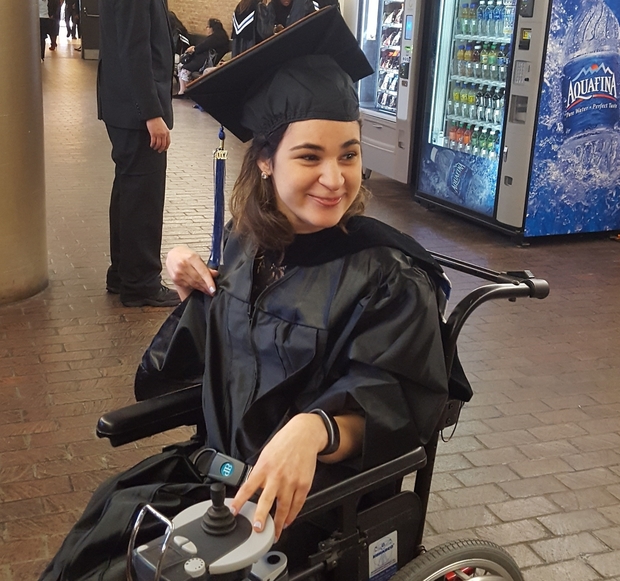 “HVS taught me to be independent — not only in my movements, but in my thinking.”

Right now, 2012 Henry Viscardi School alumnus Dayna Stropkay is exactly where she wants to be. With an Associate’s degree from Queensborough Community College under her belt and a new year at St. John’s University just beginning, she’s more determined than ever to complete her undergraduate studies before moving on to a master’s program in education.

“It’s because of the caring teachers and staff at HVS that I would like to pursue a career in education like my sister,” Dayna said. “I know it will be a hard road because I’m non-verbal, but nothing has ever stopped me before from trying to reach my dreams.”

Several years ago, however, Dayna and her family feared she was approaching a dead end. As a teenager who uses a wheelchair, she felt more like a spectator than a participant at the public high school she attended. She wasn’t passing exams, and because her large public school wasn’t prepared to accommodate a student with a severe physical disability, it was made clear that fulfilling requirements for a local diploma wouldn’t be possible.

Dayna never doubted herself, but even she was surprised by her academic prowess when she enrolled at HVS junior year. She flourished in the fully-accessible learning environment; acing tests, competing on the wheelchair basketball team, and assisting the school hearing specialist during free periods. Dayna also experienced the freedom of traveling the halls and meeting friends in the cafeteria without an aide in tow at all times.

For the first time, Dayna believed her abilities preceded her disabilities, and having a greater degree of autonomy elevated her confidence to succeed.

“HVS taught me to be independent — not only in my movements, but in my thinking,” she said. “I learned to advocate for myself, and learned what worked and what didn’t work for me.”

Before graduating high school and moving on to frequent the dean’s list in college, Dayna developed a joy for teaching as a volunteer in an elementary school classroom at Viscardi. Today she aims to use her personal experiences to encourage inclusion and accessibility in schools, so more students with disabilities have a chance to finally find their own voice.