Catching up with this social media influencer as he reaches new audiences in grad school. 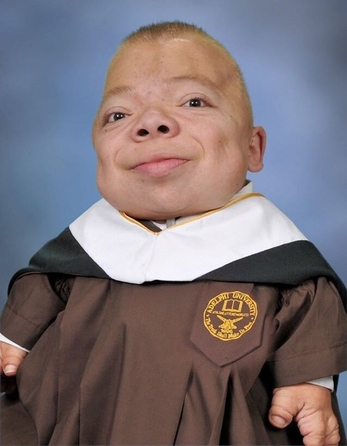 “To say disabilities does not mean ‘unable,’ we just do things differently.”

The last time we shared an update on Chris, he was a vibrant young student at the Henry Viscardi School at The Viscardi Center with an ambitious goal—being named valedictorian of his graduating class.

Years later he accomplished just that, graduating at the top of his class in 2016. Chris’s ambitions have only grown from there. A social media influencer with over 330,000 dedicated followers on Instagram, he’s often seen posing with some of today’s biggest stars and sharing personal philosophies on life. The combination of an outgoing personality and a relentlessly positive attitude has not only garnered Chris thousands of fans but opened doors to achievement as he progresses on his educational journey.

The Henry Viscardi School at The Viscardi Center provided Chris with a strong foundation and belief in his ability to be independent.

After Viscardi, Chris went on to Adelphi University where he frequently made the Dean’s List and took part in a variety of campus activities. He served as president of the school’s web radio station and wrote for the student newspaper. Chris even produced and acted in an independent film called El Padrino, released in 2019, which was written and produced by one of his communications professors.

In the spring of 2020, Chris graduated with dual degrees in Economics and Journalism from Adelphi University. This fall he is continuing his studies at Columbia University Graduate School of Journalism, where he will hone his craft as a multimedia storyteller.

Chris doesn’t believe a disability should be viewed as an obstacle: “To say disabilities does not mean ‘unable,’ we just do things differently.”

Anything seems possible for Chris as he challenges his own expectations in grad school. Like his many followers on social media, we can’t wait to see what he accomplishes next.

Watch Chris share some of his philosophies on life in this video from a recent Celebrity Sports Night event at The Viscardi Center.