Tackling her goals one step at a time. 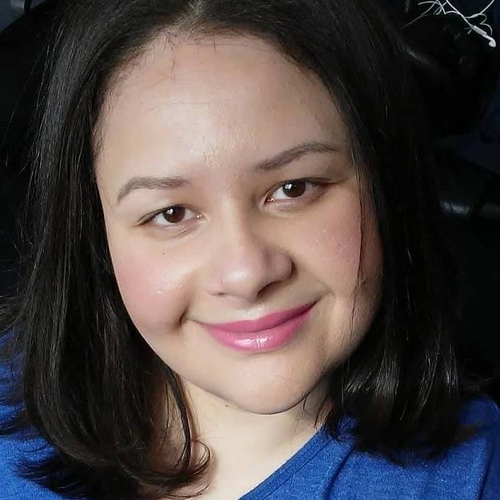 “The senior health class project… prepared us to be able to explain our disabilities to others.”

Amanda Frantz attended the Henry Viscardi School from Pre-K through twelfth grade, graduating in 2004. Amanda feels that “she has been on a long journey since graduation.” She studied Political Science with a minor in Psychology at Lehman College in New York City, married and had two sons.

Following her graduation from college, Amanda was employed as a full-time Advocate for the Christian Bible Fellowship. In her role as Advocate, she created several community based after-school programs for children. In 2014, Amanda established an online direct sales business and created her own brand, Mandi Box, which sells jewelry. More recently, she has become a marketer for a line of clothing and accessories and a website for educational children’s books.

Adding to her success as an entrepreneur, in 2015 Amanda became a part-time Program Coordinator for KEEN, a national nonprofit organization that seeks to empower children with disabilities. In 2017, she was promoted to the position of Executive Director of the New York City chapter.

While reminiscing about the time she spent at Henry Viscardi School, she realized that although her local district school may have been able to meet her academic needs, it wasn’t equipped for her physical requirements. She recalls all the assistance Viscardi provided through therapy sessions and the learning of daily living skills.

In addition, Amanda feels that Viscardi fostered a sense of community and belonging; she established strong friendships, many of whom remain her close friends today. The school also taught advocacy and was a great resource for information, including adaptive equipment. “The senior health class project, where each student had to research one’s own disability, was critical to self-awareness and prepared us to be able to explain our disabilities to others,” shared Amanda.

Among her fondest memories are the senior class trip, the Independent Living House weekends and attending Sports Night. Still to this day one of Amanda’s favorite movies is “13 Going on 30,” which she saw with her classmates on the senior trip.