This Henry Viscardi School salutation has what it takes to tackle college life. 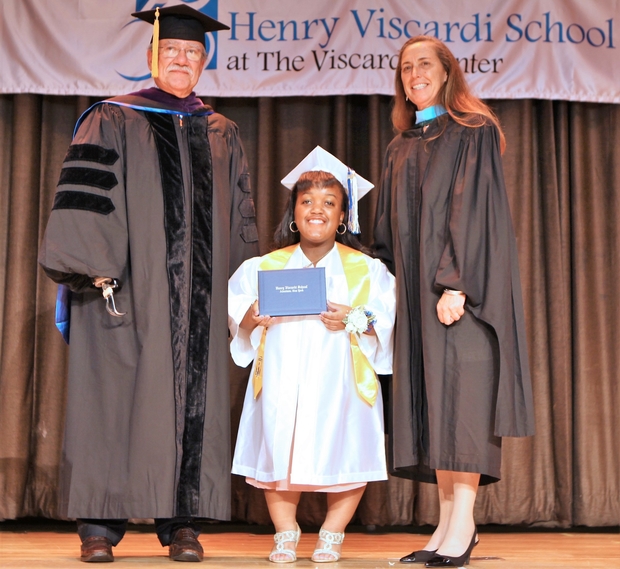 “As a student, I was given exactly what I needed to achieve my goals.”

Shortly after Alexa was born, she was diagnosed with achondroplasia, a genetic condition that inhibits bone growth. The diagnosis meant that Alexa faced health challenges in her back and legs that could last through childhood and into adulthood. By kindergarten, she was also experiencing delayed motor skills development, and it was discovered that she had mild bilateral hearing loss.

It became clear that Alexa would benefit from a school equipped to address her unique health needs. For that reason, her family enrolled her at the Henry Viscardi School at The Viscardi Center, which provides a traditional educational environment in combination with therapies and assistive technologies.

“As a student, from kindergarten through 12th grade, I was given exactly what I needed to achieve my goals,” says Alexa. “I received speech, occupational, and physical therapies until I grew out of them, and hearing services until I graduated from high school.”

A high-achieving student, Alexa left her mark at Viscardi. She was inducted into the school’s National Honor Society chapter, engaged in a youth leadership program in Washington, D.C., advocated for disability inclusion as a Viscardi Ambassador, and graduated as salutatorian. Many of her proudest moments came from her time as an athlete on the Viscardi Cougars Wheelchair Basketball team.

“I don’t like to toot my own horn, but I was the captain of the Cougars and was named MVP twice,” she boasts. “Being on that team helped me gain confidence in myself and fired up a competitive mindset that I still have now.”

Now, the focus is on building an independent life in college and beyond. Alexa is currently a sophomore year at St. John’s University, where she shares a dorm and pursues a degree in legal studies. Motivated by a successful summer internship made possible by Roy Danis, a member of Viscardi’s Board of Directors and President & CEO of Conecuh Brands, a minor in business may soon be in the cards.

Determined to top her 3.7 GPA from last year, Alexa has a busy year ahead. When she isn’t hitting the books, she returns to Viscardi to take driving lessons in the Adapted Driver Education program. She expects to pass her road test this winter.

“For many years, people doubted me because of the way I looked. That’s why I’m a great example of why you should never judge a book by its cover.”