A Viscardi alumnus bringing his unique voice to the airwaves. 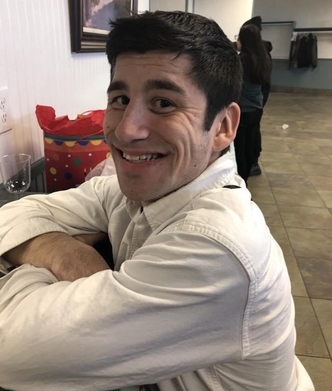 “Dr. Viscardi created a place that provided my classmates and me with a great outlet and instilled a never-give-up mentally to go out and do things in the world.”

Henry Viscardi School alumnus Alex is “Keeping It Real.” On his aptly named, self-produced podcast, he dishes opinions on everything from politics to today’s most pressing social issues. While there’s no shortage of content in 2020, it’s not unusual for Alex to devote an episode to the school where he first found his voice.

A recent episode features an interview with Viscardi’s Coach Joe Slaninka, who manages the wheelchair basketball program. As a student, Alex was urged by Coach Joe to serve as the play-by-play announcer at games and deliver daily announcements over the loudspeaker. The experience was transformative.

“I owe a big thank you to Coach Joe for encouraging me to do the morning announcements,” he says. “It really helped me discover my calling and forge a career.”

Alex’s years at the Henry Viscardi School brought opportunities for personal achievement and growth. He gained confidence as a member of the student council, honed his writing skills as a columnist at the Cougar Chronicle student newspaper, and enjoyed the thrill of competition while playing sports at Friday Night Rec.

Some of his fondest memories include meeting golf pro-Jack Nicklaus while participating in The Viscardi Center’s Celebrity Sports Night fundraising event, converting the gym into a football field for the school’s very own Super Bowl, and creating a senior video with his class.

After graduating from the Henry Viscardi School in 2009, Alex brought his broadcasting chops to the radio station at Queens College, where he received a degree in media studies. When he’s not podcasting, Alex produces the 3 p.m. and 5 p.m. shows at New York City-based talk radio station AM 970 The Answer.

Alex’s schedule may be packed these days, but he still makes a point to sit in as a guest announcer at the school’s annual wheelchair basketball tournament each winter. Whenever he returns to the Henry Viscardi School, he remembers the origins of his can-do attitude.

“Dr. Viscardi created a place that provided my classmates and me with a great outlet and instilled a never-give-up mentally to go out and do things in the world.”