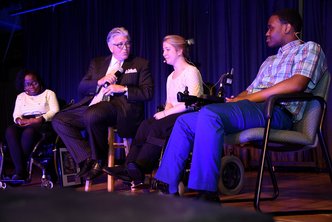 WFAN sports radio host Mike Francesa spent an evening off the air to support The Viscardi Center’s premier fundraising event, Celebrity Sports Night, on Thursday, May 17. Francesa, joined by players from the New York Mets and more than a dozen other professional athletes and celebrities, signed autographs and posed for photos with attendees, helping to raise vital funds that enable the continuation, enhancement, and expansion of programs and services for people with disabilities.

The 52nd annual event drew in nearly 600 community leaders and philanthropists to The Viscardi Center — an Albertson-based nonprofit dedicated to educating, employing, and empowering children and adults. This year was themed around the idea that, with access to opportunities, people with disabilities can be unstoppable.

“Unstoppable is the perfect word to describe our mindset at Viscardi,” said John D. Kemp, President & CEO of The Viscardi Center, during his opening remarks. “The children and adults with disabilities we serve are genuinely unstoppable on their quest for a high-quality education, a great job, and a meaningful, independent life. And all of this happens because of you here tonight.”

The theme carried the evening’s program, with guest honorees Anthony Robles, an NCAA wrestling champion who broke national records despite having one leg, and Suffolk County Police Officer Matias Ferreira, who lost both legs below the knee while serving in the U.S. Marine Corps, receiving awards recognizing their unstoppable pursuit of goals and dreams.

A segment during the program, which saw Francesa interview three young people about the ways Viscardi empowered their lives, continued the theme. Mya, 2018 Henry Viscardi School valedictorian who will study at SUNY Purchase in the fall; Annel, a student enrolled in The Viscardi Center’s PROSPER program for at-risk youth; and Kate, a Henry Viscardi School alumna who graduated with honors from Hofstra University and is now paving a career in Communications, shared their personal triumphs and discussed plans for the future.

The Viscardi Center will host its 53nd annual Celebrity Sports Night on May 16, 2019.