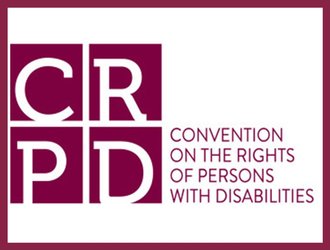 Join us in asking the U.S. Senate to ratify the Convention on the Rights of Persons with Disabilities.

Help us by endorsing this non-discrimination treaty as it seeks to achieve the same goals as the Americans with Disabilities Act (ADA) and other existing disability laws in the United States that empower individuals with disabilities to achieve economic self-sufficiency, independent living, inclusion and integration into all aspects of society.  Based on the principles of non-discrimination and equality of opportunity, the Convention on the Rights of Persons with Disabilities (CRPD) seeks “to promote, protect and ensure the full and equal employment of all human rights and fundamental freedoms by all persons with disabilities.”

With your endorsement of the CRPD, the United States Senate’s Foreign Relations Committee can be assured of American citizens’ and businesses’ support for global human rights. This treaty will assist the millions of people with disabilities from the United States, including business leaders, military veterans, students, scientists, tourists and their families, who live, conduct business, and travel abroad.  American citizens with disabilities should have the same opportunity to benefit from a world economy that is fully accessible to all people.

The Viscardi Center and its affiliates are committed to U.S. leadership on behalf of the 1 billion people with disabilities worldwide.  We believe swift U.S. ratification of the CRPD in a bipartisan fashion is in this country’s best interest, and we ask you for your support and leadership on this issue.

Take Action Today!
Show your support by simply signing a petition or sending a letter to the Foreign Relations Committee at http://www.disabilitytreaty.org/

Together, we can have a positive impact on the quality of life of people with disabilities around the world.