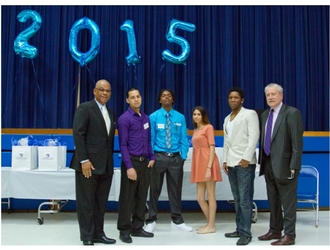 Rev. Dr. Calvin O. Butts III, this yearâ€™s keynote speaker, poses with some of the students and John D. Kemp.

Thirty-seven Freeport and Westbury high school students enrolled in Abilities, Inc. at The Viscardi Center’s PROSPER program were recognized for their achievements at its annual Moving On Ceremony on June 3, 2015. PROSPER (People Reaching for Opportunities to Succeed Personally, Educationally and Realistically) is an attendance retention program that shows at-risk 10-12 grade students the relevancy of education as it relates to employment and works towards preventing students from dropping out of school by providing educational, vocational, and social supports for students. President of the State University of New York College at Old Westbury, Rev. Dr. Calvin O. Butts III, gave a powerful keynote speech.

President and CEO of The Viscardi Center, John D. Kemp, opened the ceremony that carried an overarching theme of “believe,” before a crowd of peers, proud parents, instructors, staff, board members and the business community, stating, “These students truly believed in themselves and can now achieve anything they set their minds to.”

During Dr. Butt’s keynote, he spoke about a person’s ability to create change as long as they believed in themselves. “The PROSPER students, staff, and instructors combine to make a truly supportive team that instills a firm belief that you can accomplish anything you set your mind to if you believe in yourself,” said Butts as he described the many opportunities the program provides.
Dr. Butts also noted ways to best find fulfillment in life, “Do not judge life by dollars and cents; measure success by your ability to uplift others and your achievements in helping something greater than yourself.” He concluded by calling upon students to use him as a resource at SUNY Old Westbury, to further challenge themselves, and most importantly to, “aspire and do something for the benefit of humankind. When you do things for others you realize there is something greater than yourself and then, you will always prosper.”

Since its inception in 1997, 98 percent of some 900 PROSPER students who have completed the program have graduated from high school and gone on to postsecondary education, employment, the military, vocational training or technical school. This year, 24 students have already secured summer jobs as a result of the resume development and interview preparation they received through the PROSPER program. Students receive up to four elective credits from their school districts for completing the program which is a unique partnership among colleges/universities, high schools and local business and industry.

Jim Mollé, coordinator of PROSPER, noted that “every student gets real-life skills.” He further described the positives associated with the program, “The communities they [students] come from benefit three-fold: the schools access specialized support services they might not otherwise have been able to provide; tax dollars produce a tangible result; and young adults are better equipped to make solid contributions and lead productive lives.”

Westbury High School guidance counselor, Percy Holmes spoke so highly of the value of the program for the students, he noted, “We wish we could do this for every young person in our building.”
Tresohn Worthy, a Westbury student who completed the program, remembered how before PROSPER he lacked a motivation to go to school, was easily discouraged, and didn’t see life going anywhere. He thanked the PROSPER staff and his Mom for, “Restoring my motivation and helping me see that there are new and reachable possibilities.”

Isaiah Smith, a PROSPER student from Freeport, now strives to become a CEO or Police Officer. “PROSPER grabbed my hands and pulled me up, showing me how to use negative energy as motivation to accomplish my goals,” said Smith, explaining the positive effect PROSPER has had on his life.

Two alumni of PROSPER, Leah Patterson from Westbury and Melinda Murphy of Freeport, came to the ceremony to show their support and to share how their lives have changed as a result of the program. Patterson stated, “The program helped me mature, be exposed to different career paths, and gave me a powerful experience that helped motivate me to start work as a paralegal, and eventually becoming an attorney.” Murphy used the skills she gained at PROSPER to move on to college and take steps towards a career in pharmaceuticals.

Mr. Hurdle, a parent of two students who have completed the program, shared that the program was also a good resource and support for parents. He said, “We are living in a day where kids don’t always make the right decisions. PROSPER helps them recover after wrong decisions… the program brings out the best in students and shows parents that their children were born to do great things.”

Parent Mrs. Young, sang an acapella version of Whitney Houston’s “Greatest Love of All” at the end of the ceremony. In a beautiful rendition, Houston’s words rang true to everyone attending, “I believe the children are our future.”