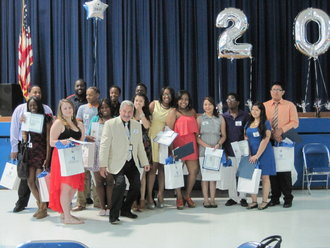 A group of students who completed the PROSPER program which encourages teens to stay in school.

Thirty-eight Westbury and Freeport High School students enrolled in Abilities, Inc., at The Viscardi Center’s PROSPER Drop-Out Prevention/Attendance program — providing educational, vocational and social supports for at-risk students in 10th-12th grade — were recently recognized for their accomplishments. PROSPER (People Reaching for Opportunities to Succeed Personally, Educationally and Realistically) shows adolescents the relevancy of education as it relates to employment and works towards preventing them from dropping out of school while preparing them for the business world upon graduation.

The program completion exercises were held June 5th at the Center’s campus in Albertson before a crowd of parents, teachers, staff, administrators, board members and the business community. In opening remarks, Nassau County District Attorney Kathleen Rice, in a candid down-to-earth tone, told of her personal challenges and encouraged students to confront theirs so that they too could set and achieve their own goals, proclaiming, “You need to feel the fear and do it anyway.”

Jessica Swirsky, President and Chief Operating Officer of Abilities, Inc., at The Viscardi Center, spoke about students changing the direction of their lives, noting, “The outcomes for this program have been exceptional, with so many of the graduates becoming contributing members of our workforce and communities.”

Since its inception in 1997, 98 percent of some 800 PROSPER students have completed high school and continued on to post-secondary education, employment, the military, vocational training or technical school. This year, 24 of the students have already secured summer jobs as a result of the resume development and interview preparation they received through the PROSPER program. Students receive up to four elective credits from their school districts for completing the program which is a unique partenership among colleges/universities, high schools and local business and industry.

Keity Beltrez, a Freeport High School student, praised PROSPER staff and said she “met some inspiring people on the tours,” referring to college visits that are part of the program curriculum. Keity’s application essay noted how she knew she had made some poor decisions and how she felt the program could provide the focus and guidance needed to take ownership of her behavior and put her on a course for future success.

A parent made a poignant statement about the program when she took the podium and spoke about her son, Deandre Robinson. She told the audience, “They turned him into being a man.”

In an interview, Jim Mollé, coordinator of PROSPER, noted that “every student gets real-life skills.” He went on to say, “The communities they [students] come from benefit three-fold: the schools access specialized support services they might not otherwise have been able to provide; tax dollars produce a tangible result; and young adults are better equipped to make solid contributions and lead productive lives.”

About The Viscardi Center: Founded by Dr. Henry Viscardi, Jr., who served as disability advisor to eight U.S. presidents and became one of the world’s leading advocates, The Viscardi Center educates, employs and empowers children and adults with disabilities. It provides Pre-K through High School education, school-to-work transition services, vocational training, career counseling and placement, assistive technology and workforce diversification assistance to children, adolescents, and adults with disabilities and businesses. A global leader, it employs 300+ professionals, including experts in education, human resources and technology. Learn more at viscardicenter.org