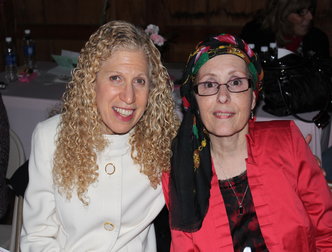 Patricia Birbiglia, a resident of Bellmore and the former Director, Youth Transition Services and Placement at Abilities Inc. at The Viscardi Center, was honored on Thursday, March 14 for her tireless advocacy and countless educational and rehabilitative community efforts. The event, held at “The Barn” at Old Bethpage Village Restoration, recognized and honored twelve extraordinary women and their contributions to Nassau County.

Pat began her career at Abilities, Inc. assisting adults with disabilities in securing competitive employment and later shifted her efforts to working with the youth community. Pat is one of the most respected people in the field of school-to-work transitional services and has developed, implemented and expanded numerous programs that have transformed the lives of thousands of individuals with disabilities. They include PROSPER, a retention attendance program designed for youth with and without disabilities attending local high schools who have been identified as at risk of achieving graduation success as well as a school-to-work transition program that is utilized by over 20 school districts in Nassau and Suffolk counties. Highly successful, a large percentage of the students go on to further education, training, employment, and generally living with greater independence and dignity.

Pat has been an active member of several professional organizations, including the New York State Rehabilitation Association’s School Partnership Committee as well as the Nassau Placement Network (Treasurer), Nassau County Mental Health Association (Taskforce Executive Member), Schools Administrators/Gang Awareness, LIFT for Kids and MADD. She also created an organizational-wide Adopt a Family initiative at The Viscardi Center to support families of adults and children with disabilities. She was a recipient of the 19th Assembly District’s “Women of Distinction” Award for 2012 acknowledging extraordinary efforts made by women to make our community a safer, better place to live.

“Pat Birbiglia has been an integral part of The Viscardi Center for over forty years,” said Jessica Swirsky, President and Chief Operating Officer, Abilities, Inc. at The Viscardi Center. “Her dedication and passion toward helping persons with disabilities, and the innovative programs she has worked to successfully implement, have brought great pride to our organization as well as the individuals and families she has served. Pat has always been a great visionary, and it is with great pride that we honor her for her work and achievements.”

Founded by Dr. Henry Viscardi, Jr., who served as a disability advisor to eight U.S. presidents and became one of the world’s leading advocates, The Viscardi Center provides Pre-K through High School education, school-to-work transition services, vocational training, career counseling and placement, assistive technology and workforce diversification assistance to children, adolescents, and adults with disabilities and businesses. A global leader, it employs more than 300 professionals, including experts in education, human resources and technology.