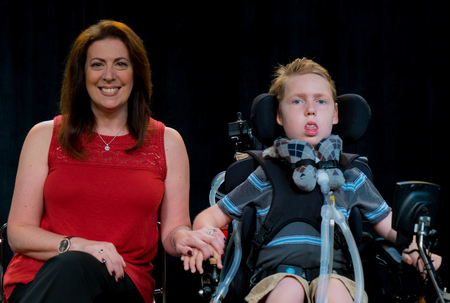 “…although Dylan looks perfectly capable, he needs to be constantly monitored by us and his healthcare team, including a nurse that attends school with him, as an issue can happen at the drop of a hat. This is very challenging and it’s why we’ve had difficulty finding dentists and doctors who will treat Dylan.”

Mother to Dylan Cuevas, a Henry Viscardi School at The Viscardi Center Student

Dylan is definitely the over-achiever of our family. He loves to be active and take trips to the aquarium, the zoo, all sorts of things. He’s a very determined young man.

He was our first born and a perfectly healthy, normal baby but when he was about five months old, we started to notice general weakness. We took him to a neurologist and after months of testing, he was diagnosed with spinal muscular atrophy. This is a neuro muscular disorder which means Dylan is totally non-ambulatory. When he was two years old, he lost the ability to breathe on his own, as well as his ability to swallow, which means he could choke at anytime. Therefore, although Dylan looks perfectly capable, he needs to be constantly monitored by us and his healthcare team, including a nurse that attends school with him, as an issue can happen at the drop of a hat.

This is very challenging and it’s why we’ve had difficulty finding dentists and doctors who will treat Dylan. They find it overwhelming, or intimidating. In fact, the way we found a dentist who could treat him was through one of his critical care doctors, who not only thought to ask us if we had taken him to the dentist, but also made a great recommendation to us for our current dentist after several turned us down.

Dylan’s condition means his overall daily dental care is critical, as the slightest infection could put him into respiratory arrest. So between the nursing staff, and my husband and I, we are constantly doing oral care. For instance, if he has a sour stomach you’ll be able to tell through his mouth and we’re constantly going into his mouth to suction him just because he can’t swallow. And we also try to brush his teeth sometimes three, or four, times a day followed by mouthwash.

It’s important for the public to know how expensive and time consuming a doctor or dental visit can be for the disabilities community. It’s one more thing for the parents or caregivers to have to think about when you’re visiting all these other doctors. Where do you fit that in? It becomes a problem. While the dentist we see now is covered by our private insurance, unfortunately, a lot of dentists don’t take our insurance or you have to pay upfront and the expense of having a child with disabilities is already significant. Like the cost of a wheelchair, the cost of a bath seat. So it could make the time and cost of dental care seen by families as not essential.

Professionals who have been in practice for years also need to realize that more people with disabilities are living longer and healthier lives, due to new medications, treatments and greater respiratory care. Now there are more opportunities for them to leave their home, or be able to live in independent living homes, which means unlike before, it’s more likely a doctor or dentist will meet a patient like Dylan. That’s why I think that there has to be some sort of education for people who are new to the field, and for people in the field, to be retrained on things like this.

Also, a concept like a multi-disciplinary center would be ideal. Professionals could interact and consult with each other about their patient, where parents could have one stop to see all the providers needed—where no one feels scared, overwhelmed or intimidated by our children’s conditions.

A healthy body and mouth gives Dylan more confidence to go out there and advocate for himself, as well as socialize more. It does make a big difference. We’re determined that Dylan has access to every opportunity to be the healthiest and happiest he can be.