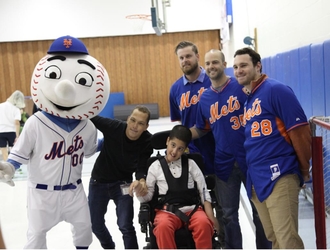 “Play ball!” That’s exactly what three New York Mets starters did when they visited Henry Viscardi School at The Viscardi Center on September 15, 2014. Pitcher Dillon Gee, second baseman Daniel Murphy and first baseman Lucas Duda played a friendly game of whiffleball against a team of Viscardi students who were cheered on by over 150 of their classmates and school mascot, Cubbie the Cougar. Check out the action.

Mets players have been coming and playing ball with the students for as long as many can remember. Gee and Murphy were repeat visitors, but for “rookie” Duda, playing in a wheelchair was a whole new ballgame. Duda noted, “Murph and Dillon didn’t really give me any pointers today.”
See photos from the visit.

“Every time I come here, I like to spend as much time in the chair as I can and just immerse myself in what they have to deal with,” explained Gee. “It’s hard to hit and catch, but these students are very athletic and they make it work.”

“We leave way more rewarded then when we came and are touched by the level of perseverance these students have,” shared Murphy.

Lenny, Destini, Kristian, Chris, Ariel, Patrick, Te, Mariah and Marcos fielded Team Viscardi. Viscardi wheelchair basketball coach, Joe Slaninka, refereed the game. Highlights of the three inning ballgame included a hard line drive up the middle by Destini that nearly put Gee on the DL. Gee joked that she nearly killed him. The game also featured some speedy base running by Alexa and Kristian and a strong pitching performance by Marcos.

Patrick, attending Henry Viscardi School for the first time this year, was proud of going 2 for 2 against Gee. With a big grin on his face, Patrick told of how cool it was to play against the Mets, “it’s something I never thought I would have done.”

Following the game, the players answered questions from the whole student body. Sam asked what the players’ best memory would be of retiring New York Yankee, Derek Jeter. Murphy noted his would be when during a game in 2009, Jeter was on base and put a hand on his shoulder and said, “you’re having a good year kid.” For Gee, his lasting memory would be the game he struck Jeter out at the plate. That brought a few groans from the Yankee fans in the gym.

One student asked about the players’ favorite sports teams… the Nets for Duda, the Dallas Cowboys for Texas native Gee and the New York Rangers and Florida Gators for Murphy. Another student asked if they are often recognized off the field. All three said they aren’t recognized very often. Gee felt there was nothing really special about him that caught people’s attention but, he did note that the year he had a long goatee he was spotted a bit more frequently.

When asked if they knew sign language, Duda shared that he knew how to sign “I love you.” Many employees at the Center were reminded of how Dr. Henry Viscardi, Jr. used to sign “I love you” at the end of all of his speeches to them and the students. It was yet another reminder about how Henry Viscardi School is truly a school that love built and one that continues to have a special place in the heart of every visitor who enters it.