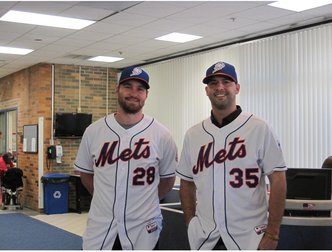 New York Mets second baseman Daniel Murphy, pitcher Dillon Gee and Mr. Met visited the Henry Viscardi School at The Viscardi Center on September 18 to play some baseball with the students. They also took time to “field” questions from the students about their careers, favorite teams to play and personal life. View photos of the visit.

When asked about his visit, Daniel Murphy said, “This was a chance to come and take a step away from our job and see what good is done here. We came to lift their spirits, but you are more blessed than when you walked in.”

It was Dillon Gee’s second visit to the school to play ball and he also attended The Viscardi Center’s annual Celebrity Sports Night fundraiser several years ago. “It’s better every time I come. It’s great to see their smiles as they’re having fun with us.” 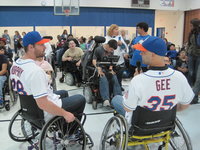 So what did they think about the Q&A session with the Viscardi students? “They had some great questions to ask today,” shared Gee. “Some were on a personal level, not just about baseball.”

Murphy, clearly enjoying the interaction with the students, added, “You are never sure what questions they’ll ask, but they were cool.” 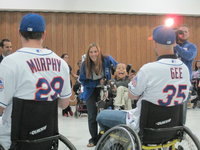 After striking quite a few poses and signing some autographs, Gee and Murphy passed out Mets knit caps to all of the students before they returned to class.

A video of the visit was compiled and appeared on the big video screen during the evening’s Mets game.