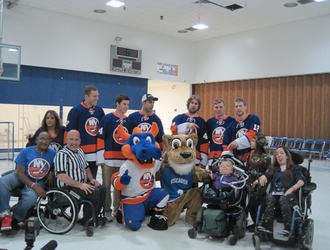 In what has become an annual event, the New York Islanders visited the Henry Viscardi School at The Viscardi Center on February 25, 2014 and played a game of wheelchair hockey against the students. Watch the NY Islanders TV story about the hockey game.

The game ended in a 6-6 tie after three periods, overtime and a shoot-out, was highly competitive and entertaining. Playing for the Islanders were Casey Cizikas, Josh Bailey, Brian Strait, Matt Carkner, Thomas Hickey and Calvin De Haan. All of them sat in wheelchairs to play, which was a challenge for them. Even the team mascots, Sparky the Dragon and Cubby the Cougar, participated in the game.

“This is a once in a lifetime experience,” said Marcos, an 11th grader. “They’re great athletes and people and it is nice that they take the time to do this.”

NY Islanders, Left Winger, Josh Bailey said, “It was tricky wheeling around, but it was a lot of fun. It was a good game.”

Even the students who did not play in the game were able to get involved by cheering on their team. Many students wore their Islanders shirts and there were even a few Rangers jerseys in the crowd.

Sam, a 10th grader, one of two students who announced the game, said, “Announcing the game is almost like the pros do. It is hard since the game is so fast paced.”

Between periods, the crowd, along with the Islanders, sang Happy Birthday to Chelsea, a student celebrating her 21st birthday. After the game, with the help of the assistive technology she uses to communicate, Chelsea said, “This was my best birthday ever!”

Founded by Dr. Henry Viscardi, Jr., who served as disability advisor to eight U.S. Presidents and became one of the world’s leading advocates, The Viscardi Center provides Pre-K through High School education, school-to-work transition services, vocational training, career counseling and placement and workforce diversification assistance to children, adolescents, and adults with disabilities and businesses. A global leader, it employs more than 300 professionals, including experts in education, human resources and technology.