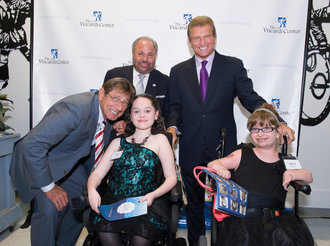 For over four decades, sports legends and celebrities have gathered at The Viscardi Center’s Annual Celebrity Sports Night helping to fund programs and services that educate, employ and empower children, adolescents and adults with disabilities. This year’s event, held May 16 at the Center’s campus in Albertson, NY, was attended by 600+ guests and over 35 athletes and celebrities. View photo gallery.

“For 47 years we have been privileged to have sports legends and personalities attend this event, with many returning year after year,” said John D. Kemp, President and CEO of The Viscardi Center. “Once they come and see the children and adults with disabilities that we serve, the challenges faced every day, and the goals these individuals are setting for themselves and reaching, they are forever touched in a way they might not have initially expected.”

Michael N. Vittorio, President and CEO of The First National Bank of Long Island, received the Distinguished Honoree Award for his numerous contributions to the local community, residents and businesses. “The First National Bank of Long Island welcomed the opportunity to work with The Viscardi Center and to help give back to the community,” said Vittorio. “The children who attend the Henry Viscardi School, and the adults who participate in the Center’s programs, are very much a part of that community. It was a pleasure to work with the staff, students and adults of The Viscardi Center.”

Joe Theismann, NFL MVP and Super Bowl champ, received the Roy Campanella Award. In a heartfelt address, he told the audience, “Tonight has been an eye-opener for me…these young men and young women at this school here, this Center, they are the true heroes.” Theismann added, “Nothing will ever mean more to me than the honor that you bestow on me tonight — because of these young men and young women.”

Phil Villapiano, a former Oakland Raider who spent the afternoon with students, remarked, “I wish my kids had some of that spunk these kids have.”

One of the evening’s highlights was a performance titled The U in Us!, featuring students, athletes and celebrities. Produced by Olympic Figure Skating Champion JoJo Starbuck, it turned the tables on an American culture idolizing sports and entertainment figures: showcasing 6th-12th graders from The Center’s Henry Viscardi School and how they’re the people others have come to admire. The closing number, a moving takeoff of “Do You Hear the People Sing” from Les Misérables, brought the audience to its feet.

The evening also included a live auction featuring a private cruise around New York Harbor with actor Steve Schirripa and Sports Night Chair Bo Dietl, seats for 15 in the Mets’ owner’s luxury suite at Citi Field, and tickets to the 2014 NCAA Final Four in Texas. Next year’s Celebrity Sports Night is scheduled for May 15, 2014.