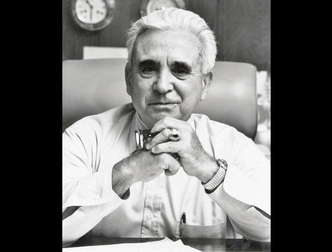 The Viscardi Center today announced an official call for nominations for the 2016 Henry Viscardi Achievement Awards, which recognize exemplary leaders with disabilities from around the world. Recipients will be honored during a special ceremony in New York City on December 1.

The Henry Viscardi Achievements Awards were established to commemorate the vision of the Center’s founder, Dr. Henry Viscardi, Jr., who himself wore prosthetic legs. As a premier disability advocate, he served as an advisor to eight presidents, from Franklin D. Roosevelt to Jimmy Carter, and implemented groundbreaking employment and education programs for people with disabilities.

First bestowed in 2013, these international awards celebrate those in the disability community who, through the example of their professional accomplishments and advocacy efforts, are continuing Dr. Viscardi’s legacy by reshaping societal perceptions and eliminating barriers. Past recipients were individuals with a wide range of disabilities from distinguished backgrounds in academia, healthcare, government, non-profit, and corporate sectors.

“Every day, people with disabilities are leaving their mark all over the world, with their work often transcending the geographical boundaries of where they live,” said John D. Kemp, President and CEO of The Viscardi Center. “Each year, the Award recipients are a dedicated, diverse, and trendsetting group that reminds us all how a single person can spur change on a global scale.”

The 2016 Viscardi Awards Selection Committee is being co-chaired for the fourth consecutive year by Robert Dole, former U.S. Senator, along with Sherwood “Woody” Goldberg, Esq., retired U.S. Army Colonel and current Senior Advisor for Asian Affairs at the Center for Naval Analysis.

“As co-chairs of the selection committee, Senator Bob Dole and I encourage you to identify meritorious candidates who have made extraordinary contributions to the greater community,” said Goldberg, who has served on the committee since the inception of the awards. “We have experienced how much it means to everyone nominated, and those selected for the award, to have their contributions acknowledged in keeping with the legacy of Dr. Henry Viscardi, Jr. as is perpetuated through the outstanding work of The Viscardi Center.”

The submission deadline is September 30, 2016. To submit a nomination or learn more about our selection process, please visit www.viscardicenter.org/about/hvaa.

*Does not imply official endorsement of The Viscardi Center by the Department of Defense.

About The Viscardi Center
Founded by Dr. Henry Viscardi, Jr., who served as disability advisor to eight U.S. Presidents and became one of the world’s leading advocates, The Viscardi Center educates, employs and empowers children and adults with disabilities. It provides Pre-K through High School education, school-to-work transition services, vocational training, career counseling and placement, assistive technology, adapted driver education and workforce diversification assistance to children, adolescents and adults with disabilities, and businesses.