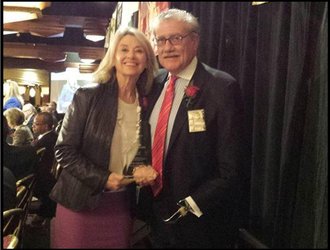 The Viscardi Center’s President and CEO, John D. Kemp received one of this year’s David Awards bestowed by Networking magazine. The Awards, named for David the giant slayer, are given annually to Long Island business leaders who have gone above and beyond and have performed generous and unselfish acts that benefit the community at large.

The David Awards ceremony, which featured Bernadette Castro as master of ceremonies, was held on January 16, 2014 at the Crest Hollow County Club in Woodbury NY. Mr. Kemp was given a standing ovation after being introduced by his wife, Sameta Kemp.

“I am honored to be one of the recipients of this year’s David Awards. This year, and in years past, the award has been given to some great individuals and I am flattered that I am thought of in their company.  I appreciate the recognition of the work we are accomplishing at The Viscardi Center from Networking Magazine,” said John D. Kemp.

Founded by Dr. Henry Viscardi, Jr., who served as disability advisor to eight U.S. Presidents and became one of the world’s leading advocates, The Viscardi Center provides Pre-K through High School education, school-to-work transition services, vocational training, career counseling and placement, assistive technology and workforce diversification assistance to children, adolescents, and adults with disabilities and businesses. A global leader, it employs more than 300 professionals, including experts in education, human resources and technology.