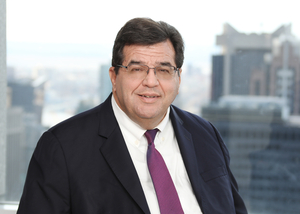 Jim Sinocchi is Head of the global Office of Disability Inclusion at JPMorgan Chase.

Jim works with leaders and employees across the firm to set the strategy for driving an inclusive culture for recruiting, hiring and promoting qualified people with disabilities. His office also supports employees who serve as caregivers.

Having sustained a spinal cord injury early in his business career, Jim is keenly aware of the challenges facing both people with disabilities and employers. He represents the firm in forums at the United Nations, in discussions with members of Congress, and in meetings with government officials and nonprofit entities.

In September 2019, Jim was appointed chair of the 19-member Air Carrier Access Act Advisory Committee. Its members will advise U.S. Department of Transportation Secretary Elaine Chao on issues relating to the air travel needs of passengers with disabilities.

He joined the firm in 2016 following a 38-year career at IBM, where he led global workforce communications, creating awareness and understanding of IBM’s Human Resources and Diversity programs, policies and initiatives. He also served as Corporate Communications Director for IBM’s Workforce Communications division and was the lead co-chair executive for the IBMers with Disabilities Global Council.

Jim received a Master’s degree in Public Administration from New York University and a Bachelor of Arts from Colgate University. Married with two grown children and two grandchildren, he resides in the Boston area.