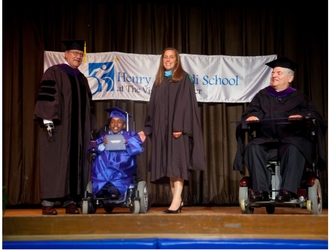 Henry Viscardi School at The Viscardi Center, which serves children with severe physical disabilities, held its 48th Commencement Ceremony on June 25, 2015. President and CEO of The Viscardi Center, John D. Kemp, drew attention to the fact that the students were graduating during a landmark year, the 25th anniversary of the passing of the Americans with Disabilities Act (ADA). In his remarks, Kemp noted, “Your self-advocacy, and that for others, has begun here at Viscardi. Now go out and continue to shape the world for all of us with disabilities. Show your talents. Your pride. Your greatness.” View photos from the Commencement.

Many of the graduates are attending higher education institutions in the fall, including Hofstra University, Edinboro University and local community colleges, to pursue coursework in business, graphic design, accounting, marketing, criminal justice education and Liberal Arts. Still others are moving on to employment opportunities and programs within their communities.

This year’s valedictorian, Aaron Hampton, who received the 2015 Council for Exceptional Children Yes I Can Award for Academics, plans to study biology at Hofstra. During his remarks, Hampton encouraged his fellow graduates to set an example for others and to, “do what people think people in wheelchairs can’t do.”

Salutatorian, Jason Levy, also attending Hofstra this fall to pursue a degree in marketing, spoke about the different interests of his classmates and the memories they shared. He also challenged this classmates to, “prove the Class of 2015 is the best you’ve ever seen.”

Ken Kunken, Esq., Deputy Bureau Chief for the District Attorney’s Office Nassau County, and a member of the Abilities, Inc. at The Viscardi Center’s Board, was this year’s commencement speaker. “Ken Kunken’s involvement with The Viscardi Center started over 35 years ago when he was an Employer Development Specialist here, placing people with a wide variety of disabilities, skills and educational levels in employment opportunities,” explained Kemp as he introduced Kunken. “Determined not to be defined by his disability, Ken is a successful attorney widely respected by his colleagues and peers. He is an ideal role model for the students of Henry Viscardi School.”

During his remarks, Kunken told the students that they demonstrated the abilities the school’s founder, Dr. Henry Viscardi, Jr., would be proud of and that they could achieve great success as other Viscardi graduates had before them, including Judge Rob Pipia. He also spoke about how the perceptions and attitudes about people with disabilities have changed since he acquired his disability at the age of 20, “keep your expectations high and don’t let others’ expectations set your future. What is important is what you think you can do.”

Diana DeVivio, Superintendent/Principal of the Henry Viscardi School, encouraged the students to never stop learning and to seek and surround themselves with people who can teach them and are good examples. “Leave here hungry for knowledge and be a learner for life,” urged DeVivio.

During the commencement, the Heartfelt Teacher Appreciation Award was presented to Kim Albrecht, a long-time teacher at Henry Viscardi School. Selected by her peers, Albrecht was recognized for her dedication to the students and her hands-on involvement with the students in planning their annual senior trip, participation in the Center’s Sports Night fundraiser, and afterschool and extracurricular activities.