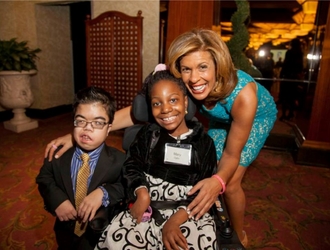 Hoda Kotb, co-host of the fourth hour of NBC’s Today and Dateline NBC correspondent, spoke to over 400 guest at the March 30th Reach for a Star Luncheon that raised funding for the Henry Viscardi School at The Viscardi Center’s after-school programs. Upon her arrival, Ms. Kotb greeted Viscardi students and posed for photographs. She opened her remarks by taking some “selfies” that she showed on air the next morning. After meeting a group of students and learning more about Henry Viscardi School, which serves children with severe physical disabilities who often require life-sustaining medical treatment throughout the day, Ms. Kotb shared, “I get it… and why all of you here today help out.” (See more photos from the Luncheon.)

During her remarks, that were both entertaining and poignant, Ms. Kotb offered words of encouragement and shared some lessons she learned while facing her own challenges. She told a story about how after filming a segment in Ireland while recuperating from her breast cancer surgery, she met a gentleman on the airplane that made her see things differently. He explained how breast cancer was now a part of her and that by sharing her journey she could help many other people. Ms. Kotb also touched upon three things she learned along the way: Stop wasting time and hold on to the things you love and get rid of those you don’t; how once you’ve survived a cross you have to bear the words, “you can’t scare me,” take on a whole new meaning and that, “the way you spend your days, is the way you spend your life,” and how by changing just one day leads to being able to change your life. She closed by telling those in the room, “I love the way you spend your days and your life.” After a standing ovation, Tiffany, a student at Henry Viscardi School, presented Ms. Kotb with an original piece of framed artwork that she had created in her art class.

Other highlights included a speech by Max Gold, who graduated from Henry Viscardi School in 2009. Mr. Gold is pursuing a degree in law enforcement technology and spoke about the school being his second home as he began attending it at the age of two. He spoke warmly about his connections to the school’s staff and the amazing memories he and his friends made which included weekends in the Viscardi independent living house, Friday Night Recreation, wheelchair basketball and the senior luncheon – all made possible through the funds raised by the Reach for a Star Luncheon. He also noted that without Viscardi’s adapted driver education program, “I wouldn’t be where I am today…. I’m unstoppable.”

After acknowledging the role his family has played in his personal success, Mr. Gold’s final words brought the guests to their feet. “Henry Viscardi School pushed me, guided me, loved me, empowered me and helped me. It let me become the hero of my own story. Henry Viscardi School told me, you’ve got this Max.”

A creative, energetic video, featuring two Henry Viscardi School high school students in a take-off of the fourth hour of Today with Hoda Kotb and Cathie Lee, left guests on a high and “happy” note. The video included segments about two 2014 graduates of the school who now attend Hofstra University and Class of 1982 salutatorian, Robert Pipia, appointed a District Court Judge in Nassau County in January.

Proceeds from the annual Reach for a Star Luncheon support after-school activities, clubs, adapted sports, recreation and weekend overnights that give Henry Viscardi School students the opportunity to socialize with their friends and make school days memories – just like other kids. Recent Luncheon special guests have included the “Angels of Kinky Boots” from the Broadway hit musical, Kinky Boots, and 2012 American Idol finalist Elise Testone.

About Henry Viscardi School: The Henry Viscardi School serves children (Pre-K through age 21) with severe physical disabilities who often require life-sustaining medical treatment throughout the day. Its specialized, accessible educational setting provides a fully-enriched academic program, a variety of therapies, assistive technology and medical supports to students who may otherwise need to receive instruction in their homes or a hospital.