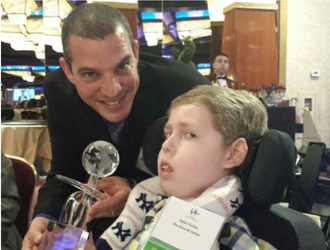 Henry Viscardi School at The Viscardi Center, which serves children with severe physical disabilities, received the Empire National Bank Innovation Award at the  3rd Annual Long Island Imagine Awards at the Crest Hollow Country Club on May 5, 2015. The winners were announced live to a room filled with more than 400 attendees. The Long Island Imagine Awards showcase the nonprofit sector and all the good work it does while providing an opportunity to deepen collaboration amongst the sector.

“Our primary goal for more than 50 years has been to unlock every student’s potential, despite overwhelming obstacles,” said Sheryl Buchel, Executive Vice President and Chief Financial Officer at The Viscardi Center, who accepted the Award. “Given our students’ severe physical disabilities, and their extensive need for assistive technology to not only communicate and learn, but to interact socially and participate in the school’s recreational programs, we are by nature a community of problem solvers and innovators. Our devoted team of teachers, therapists, and support staff use creativity, technology and collaboration to give each student the best chance for success in school, and in life.” Buchel also thanked Ken Cerini of Cerini Associates and the Imagine Awards judges for recognizing Viscardi’s “out-of-the-box” thinking and providing funding for the team to continue its visionary approaches which ultimately benefit its students.

Buchel was joined on stage by Dylan, a student at Henry Viscardi School, who was featured in a video that was part of the award submission. The video showcased some of the exciting results of the school’s  collaborative spirit and focused on a “Slam Dunk” apparatus that brings students with virtually no mobility into competitive wheelchair basketball. See the “Slam Dunk” in action.

More than 130 entries were submitted for consideration in the Imagine Awards’ five categories, including Innovation, Leadership Excellence, Social Entrepreneurism, Rising Star, and Social Impact. Henry Viscardi School was one of four finalists in the Empire National Bank Innovation Award category.

The Henry Viscardi School at The Viscardi Center is a New York State supported school that offers parents of children with severe physical disabilities, and who often require life-sustaining medical treatment throughout the day, a traditional educational setting option that provides core academics and opportunities for personal growth and leadership development. Its specialized, accessible educational setting provides a fully-enriched academic program, a variety of therapies, assistive technology and medical supports to students who may otherwise need to receive instruction in their homes or a hospital.