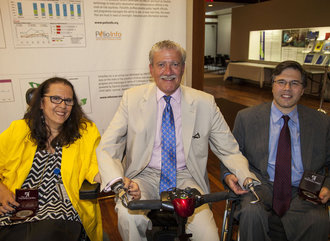 On Friday, July 19, 2013, The Viscardi Center presented the Henry Viscardi Achievement Awards to two of nine recipients at the United Nations. The international Awards, established to honor the legacy of the Center’s founder, Dr. Henry Viscardi, Jr. and bestowed for the first time this year, were designed to recognize people with disabilities for their work and influence with the global disability community of more than one billion people. The prestigious Awards Selection Committee was co-chaired by Senator Robert Dole, actress Marlee Maitlin and Ambassador Luis Gallegos.

At the ceremony, which took place at UNICEF’s Danny Kaye Visitors Center, Awards were presented to Rosangela Berman Bieler, Senior Advisor on Children with Disabilities at UNICEF, and Michael Ashley Stein, Ph.D., Executive Director of the Harvard Law School Project on Disability. View images from the presentation.

“When I hear the phrase, ‘Make no small plans,’ I think of these two people,” noted John D. Kemp, President & CEO of The Viscardi Center, in his opening remarks which praised the recipients for striving to change the world’s thinking about people with disabilities and their quality of life.

In addition to her role as a Senior Advisor, Rosangela Berman Bieler, originally from Brazil, heads the organization’s new Disability Section. A person with quadriplegia since she was 18, she has been a disability rights advocate for more than 35 years. Throughout her career, she has identified and creatively resolved many issues which have an impact on people with disabilities. Berman Bieler has lived in the U.S. since 1995, and has worked for the World Bank, IADB and other international organizations. Her expertise on disability-related issues covers areas such as humanitarian action, HIV/AIDS, media, gender and human rights. She founded the Independent Living Center in Rio de Janeiro, as well as the Inter-American Institute on Disability and Inclusive Development (IDII) which played a key role on the development of the Convention on the Rights of Persons with Disabilities.

Upon receiving her Award from Kemp, Bieler recalled meeting him 18 years ago and how he has been an inspiration to her. “I am honored to receive this Award and be among others like Michael who is helping improve the lives of people with disabilities. Awards like this help highlight the work of UNICEF and I am truly honored to receive it from your hands.”

Michael Ashley Stein, Ph.D. is the co-founding executive director of the Harvard Law School Project on Disability (HPOD), and one of the world’s foremost experts on disability law and rights. HPOD is a global resource offering pro bono policy and legal services and works to advance the requirements of the United Nations Convention on the Rights of Persons with Disabilities. A wheelchair user, Dr. Stein’s research is debunking stereotypes and offering innovative legal strategies and policy ideas that are regularly published in America’s prestigious law journals. His work has taken him to Bangladesh, China, the Philippines, South Africa, Vietnam, and many other nations.

“I am honored to be recognized with Rosangela, who has been a mentor and teacher, and humbled since there are so many advocates who are deserving and just a few blocks away,” said Stein. “I am grateful to receive it and with the work we all do together, we make the world better for people and children with disabilities.”

Global leaders, advocates and UNICEF professionals were on hand for the presentation and included: Argentine Ambassador to the UN, Hon. Jose Perez-Gabilondo and his wife, Alejandra; Carol Glazer, President of the National Organization on Disability; and Russ Cusick, Chief People Officer at Swiss Post Solutions and the Chairman of the Abilities, Inc. at The Viscardi Center Board; Zhao Chun Li; and Dr. Kathy Johnson, Associate Professor, Department of Special Education, St. Cloud State University.

Founded by Dr. Henry Viscardi, Jr., who served as disability advisor to eight U.S. presidents and became one of the world’s leading advocates, The Viscardi Center educates, employs and empowers children and adults with disabilities. It provides Pre-K through High School education, school-to-work transition services, vocational training, career counseling and placement, assistive technology and workforce diversification assistance to children, adolescents, and adults with disabilities and businesses. A global leader, it employs more than 300 professionals, including experts in education, human resources and technology.