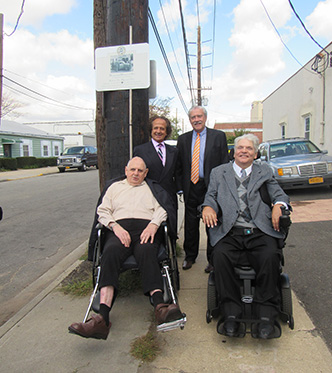 The Town of Hempstead unveiled a ‘History Happens Here’ marker in remembrance of the original site of Abilities, Inc., now part of The Viscardi Center, founded by Dr. Henry Viscardi, Jr., which provided groundbreaking work opportunities for people with disabilities when it first opened its doors 64 years ago.

“It wasn’t that long ago that people with disabilities were discriminated against in schools, at the workplace, and in other segments of society,” Supervisor Santino said. “But in 1952, the late Dr. Henry Viscardi, Jr. opened Abilities, Inc. right here in West Hempstead. The organization provided people with physical challenges with jobs, education, and a sense of pride. It became one of the first American businesses to be staffed almost entirely by people with disabilities.”

Abilities, Inc. emerged during a time when people disabilities—including wounded veterans—were often met with hesitance and opposition from employers while searching for work. Dr. Viscardi, who himself wore prosthetic legs, sought to give the disability community purpose through full-time employment and a steady paycheck.

“64 years ago, this site became a model for the world when Dr. Henry Viscardi, Jr. founded and operated one of the first U.S. businesses to be staffed primarily by people with disabilities,” John D. Kemp said. “Dr. Viscardi demonstrated that disabled veterans from World War II and the Korean War had the skills and abilities to be successful, productive employees.”

The organization started as a shop where people with disabilities could work as subcontractors for major companies, including Grumman Aircraft, General Electric, IBM, and the U.S. Department of Defense. Today, as part of The Viscardi Center, it continues to offer an array of work readiness, job placement, and school-to-work transition programs and services.

“Working out of a garage in West Hempstead, Dr. Viscardi transformed the lives of people with disabilities throughout America,” Supervisor Santino said, concluding the ceremony. “History happened right here, and the unveiling of this historical marker will serve to educate future generations about this noble enterprise.”

About The Viscardi Center
Founded by Dr. Henry Viscardi, Jr., who served as disability advisor to eight U.S. presidents and became one of the world’s leading advocates, The Viscardi Center educates, employs and empowers children and adults with disabilities. It provides Kindergarten through High School education, school-to-work transition services, vocational training, career counseling and placement, assistive technology, adapted driver education and workforce diversification assistance to children, adolescents and adults with disabilities, and businesses.