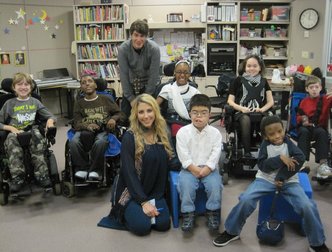 Holding “We love you” signs, students welcomed American Idol finalist Elise Testone to the Henry Viscardi School at The Viscardi Center, an accredited model academic school for grades Pre-K through 12 that serves children with severe physical disabilities, on December 18, 2012. Testone toured the School, answered questions about her musical career and jammed with sixth graders during their music class.

During the jam session, Testone sang original songs, several she performed on American Idol and also joined in singing “Stand By Me” with the students. The sixth graders also serenaded her with a festive rendition of “Jingle Bell Rock.” The visit was particularly special given that many of the Henry Viscardi School students are unable to attend concerts, like their peers do, because of their complicated transportation and medical needs. While visiting, Testone advised the students to finish school, pursue their dreams, including those of being a rock and roll star, and stressed that to be good at anything you have to practice a lot.

Testone will also be performing at the annual Reach for a Star Spring Luncheon on March 14, 2013 at the Crest Hollow Country Club, which raises monies to support programs at the Henry Viscardi School. For ticket and sponsorship information, call 516.465.1595.

Founded by Dr. Henry Viscardi, Jr., who served as disability advisor to eight U.S. presidents and became one of the world’s leading advocates, The Viscardi Center provides Pre-K through High School education, school-to-work transition services, vocational training, career counseling and placement, assistive technology and workforce diversification assistance to children, adolescents, and adults with disabilities and businesses. A global leader, it employs more than 300 professionals, including experts in education, human resources and technology. Learn more at viscardicenter.org.