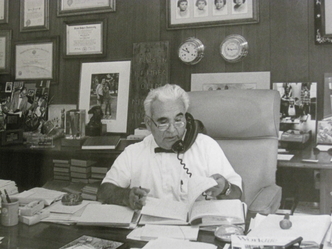 The Viscardi Center’s founder, Dr. Henry Viscardi, Jr., was posthumously inducted into the Long Island Business Hall of Fame this evening at an event held at the Crest Hollow Country Club. The first class of inductees included 20 of the most distinguished leaders in the business community. The Hall of Fame, established by Long Island Business News, is a high honor for those who demonstrate a commitment to excellence: past, present and future. A plaque bearing the names of those inducted will be displayed at Hofstra University’s Frank G. Zarb School of Business.

“It is a proud day for The Viscardi Center,” said President and CEO, John D. Kemp. “Dr. Viscardi was a visionary and had a tremendous impact on the local community, as well as the world. He operated one of the first businesses not only on Long Island, but in the U.S., to be staffed primarily by people with disabilities. It is only fitting that the plaque bearing his name is housed at Hofstra University as he collaborated with the institution on ways to make it more accessible for college students with disabilities.”

Dr. Henry Viscardi, Jr., who wore prosthetic legs, served as disability advisor to eight U.S. Presidents and became one of the world’s leading advocates. Initially founded in 1952 as a means to show that disabled veterans from World War II and the Korean War had the skills and abilities to be successful, productive employees, the organization’s services were expanded in the early 1960s to include vocational training and job placement for all people with disabilities. In 1962, Dr. Viscardi established an accredited, independent school giving children with severe physical disabilities the opportunity for an education in a more traditional setting – one that had not previously been available to them. It now bears his name.  His efforts helped inspire legislation such as the Individuals with Disabilities Education Act (IDEA) of 1975 and the Americans with Disabilities Act (ADA) of 1990.

Ken Kunken, Esq., Deputy Bureau Chief for the District Attorney’s Office Nassau County and a member of the Abilities, Inc. at The Viscardi Center’s Board, accepted the honor. Kunken was personally influenced by Dr. Viscardi, having been hired by him over 35 years ago as an Employer Development Specialist and later going on to law school. Edward P. Mangano, and Suffolk County Executive, Steven Bellone, were the evening’s keynote speakers. The inaugural class of the Long Island Business Hall of Fame, selected by a committee of top business leaders across Long Island, also included:

Founded by Dr. Henry Viscardi, Jr., who served as disability advisor to eight U.S. Presidents and became one of the world’s leading advocates, The Viscardi Center educates, employs and empowers people with disabilities. It provides Pre-K through High School education (age 3 to 21), school-to-work youth transition services, vocational training, career counseling and employment placement, assistive technology, and adapted driver education to children, adolescents and adults with a wide variety of disabilities. The Center also assists businesses in diversifying their workforces, as well as developing and advancing disability inclusive cultures in their workplaces.