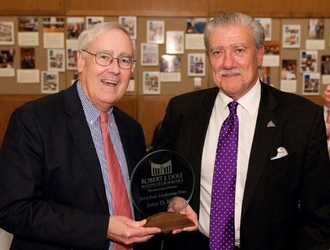 Kemp is the first disability leader to receive the distinction and personally selected by former Senator Robert Dole. “I am humbled to have been chosen by the Senator to receive this year’s Dole Leadership Prize and to join an elite group of past recipients who have made positive impacts on the lives of people around the world,” said Kemp. “I have dedicated my life to improving the quality of life for all people with disabilities and it is my hope that this distinction shines the spotlight on The Viscardi Center and the work it does every day to build the leaders of tomorrow and contributing members of society today.”

The Dole Leadership Prize will be awarded to Kemp at an interview-style program to take place at the Dole Institute on Sunday, December 14. The event is free and open to the public and will be attended by several hundred guests, students, faculty and local community members and disability leaders. The Prize includes a $25,000.00 monetary award which Kemp has chosen to gift to The Viscardi Center.  Make a donation to The Viscardi Center.

“As a wounded veteran and tireless advocate for disability rights, Senator Dole has taken a personal interest in Mr. Kemp’s outstanding service to the disabilities community,” said Dole Institute Director Bill Lacy. “Senator Dole and the Dole Institute are passionate about highlighting the unique work and inspiring life of Mr. Kemp and what he has accomplished for the disabilities movement. He simply couldn’t be more deserving of this award.” The Robert J. Dole Institute of Politics is dedicated to promoting public service, civic engagement and politics.

Like The Viscardi Center’s beloved founder, Dr. Henry Viscardi, Jr., Kemp is recognized as a disability rights statesman in America and throughout the world. He is widely respected for his many achievements, both in the corporate and non-profit worlds.  As a person with a disability who uses four prostheses, Kemp inspires others to achieve the impossible through knowledge, experience, vision, personality, and persistence. A graduate of Georgetown University and Washburn University School of Law, he was awarded an Honorary Doctorate of Law from Washburn in May, 2003. In March 2006, Kemp received the Henry B. Betts Award, widely regarded as America’s highest honor for disability leadership and service. With more than 50 years of direct experience in the disability movement, Kemp has partnered with, worked for and served as Board Member/Chair or CEO of several leading disability and nonprofit organizations. In 1995, Kemp co-founded the American Association of People with Disabilities (AAPD) with Paul G. Hearne.  In 2001, he became a partner in the Washington, DC Law Firm of Powers, Pyles, Sutter & Verville, P.C. He has also served on the Medicaid Commission and the U.S. State Department’s Advisory Committee on Persons with Disabilities. In November 2012, he was asked to serve on the NYS READY Commission, established by New York State Governor Andrew Cuomo.