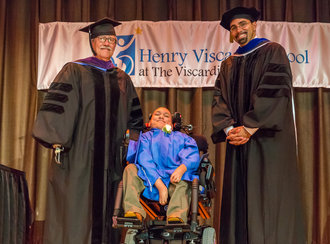 Dr. John B. King, Jr., President of the University of the State of New York and Commissioner of Education, delivered an eloquent commencement speech to the graduates of Henry Viscardi School at The Viscardi Center, which serves children with severe physical disabilities, on June 20, 2013. He also commended the graduates on their achievements and the strength of the School’s community and its commitment to academic excellence. Dr. King oversees more than 7,000 public and independent elementary and secondary schools, serving 3.1 million students, and hundreds of other educational institutions across New York State.

“We are honored to have had Dr. King as a guest at our 46th commencement ceremony and are grateful for his continued support in helping us to deliver the high quality education children with disabilities deserve,” noted John D. Kemp, President and CEO of The Viscardi Center. (Read Mr. Kemp’s last lesson for the graduating seniors.)

Having attended PS 276 in Brooklyn himself, Dr. King humbly shared the personal challenges he overcame as a young boy growing up in a single parent household with his father and the influence an elementary school teacher had on his life, “he is the reason I am standing here today.” Dr. King encouraged the students to rely on the support of their networks and acknowledged the power of community. He also expressed his belief that it was their responsibility to give back and invest in others, as others had in them, and that he hoped through the endeavors they chose that they’d find a way to do that. (View Dr. King’s commencement speech)

The Henry Viscardi School 2013 graduating class was made up of 22 students. Eighty-seven percent of the graduates received an Advanced Regents, Regents or local diploma. In addition, sixty-four percent of the graduates are college bound. In the fall, they will attend higher education institutions such as Adelphi University, Edinboro University, SUNY Farmingdale, Mercy College, Nassau Community College, Wright State University and Lehman College.

“We are so proud of the achievements of our students. They are remarkable young men and women who have thrived at Henry Viscardi School with the help of our faculty and staff and the love and support of their families,” said Patrice M. Kuntzler, Vice President of Program Development at the Henry Viscardi School at The Viscardi Center.

During the commencement exercises, Marianne Dolan Weber presented the annual Excellence in Education Award, bearing her name, to the entire faculty and staff of the Henry Viscardi School. The Award recognized the teamwork and dedication shown during a particularly challenging school year, which included the affects of the New York City bus strike and Superstorm Sandy, to ensure students arrived to a safe, caring environment every day so they could actively learn, personally grow and also have fun.