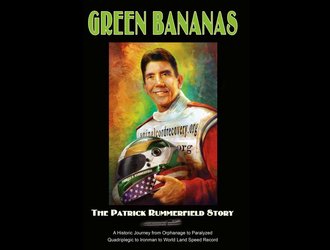 Patrick Rummerfield, the first fully-functional person with quadriplegia in the history of medicine – “overcoming quadriplegia”,  as he describes it, through 17 years of intense physical therapy and an iron will – has chronicled his extraordinary journey in “Green Bananas: The Patrick Rummerfield Story,” illustrating the power of positive thinking and never giving up. For each book sold in the northeast, he will donate $10 to The Viscardi Center helping support vital programming.

Mr. Rummerfield is well known at The Viscardi Center. Earlier this year he was a special guest at the Center’s 47th Annual Celebrity Sports Night, receiving one of the internationally-acclaimed Henry Viscardi Achievement Awards for leadership in the disability community and improving the lives of people with disabilities.

“Patrick is an extraordinary person with a poignant, moving story,” commented The Viscardi Center President and CEO John D. Kemp. “His against-all-odds recovery is a testament to the power of positive thinking and unflagging perseverance. We’re very grateful for his generous offer to donate a portion of the proceeds from book sales to the Center.”

“Receiving the Henry Viscardi Achievement Award for Leadership is a true blessing and honor in my life. I feel privileged to be associated with The Viscardi Center and appreciate the opportunity to collaborate with such an esteemed team of individuals focused on improving the quality of life for others,” said Rummerfield.

The 270-page self-published paperback – some chapters beginning with inspirational quotes, including his own – details a life forever changed by a tragic car accident nearly 40 years ago at age 21, leaving him unable to move any body part below the neck. Refusing to accept that fate, he recounts an epic struggle turning what many thought an impossible task into a bold, unprecedented challenge – regaining full mobility:

I called out for a nurse. “Hey,” I said. “Hey, look. I can move my toe. Look down at my foot!” A nurse who had responded to my outburst looked skeptical. A full quad like me could not do such a thing. “An involuntary twitch,” she said. But I had willed that toe to move after I thought I had seen it twitch. Perhaps that first time it was involuntary. The second time — the second time — it was not. It had moved when I commanded it to. “No,” I said. “Look.”And I made it twitch again.

Randy Wayne White, The New York Times best-selling author: “I’ve just finished his book, Green Bananas…a life-changing chronicle for anyone who has doubted the obtainable heights of his or her own unique aspirations. Pat’s book has left me in awe of this incredibly fun, smart, unassuming, very driven and decent man.”

H. DeWayne Ashmead, CEO/owner Albion Labs: “I was on the edge of my seat as I devoured the book in its entirety. At times, Pat brought me to tears as he faced adversities most of us will never see or fully understand. I found myself cheering as he conquered each one.”

Tala Hadavi, journalist, Voice of America TV & Radio: “Patrick’s story is going around the world to over 145 million in 40 different languages. I wish everyone could spend just an hour with Patrick.”

About The Viscardi Center: Founded by Dr. Henry Viscardi, Jr., who served as disability advisor to eight U.S. presidents and became one of the world’s leading advocates, The Viscardi Center educates, employs and empowers children and adults with disabilities. It provides Pre-K through High School education, school-to-work transition services, vocational training, career counseling and placement, assistive technology and workforce diversification assistance to children, adolescents and adults with disabilities, and businesses. A global leader, it employs 300+ professionals, including experts in education, human resources and technology.