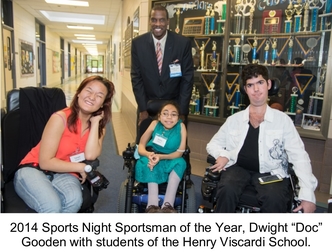 The Viscardi Center, a network of non-profit organizations providing a lifespan of services that educate, employ and empower people with disabilities, is hosting its 49th Annual Celebrity Sports Night on May 14, 2015. One of Long Island’s premier fundraising events, it is attended by over 500 business and community leaders, philanthropic individuals, celebrities and athletes. The event takes place at The Viscardi Center which is located in Albertson, New York.

This year’s event, presented by DiversityInc and chaired by John A. Danzi, Principal, Long Island Hotels, will recognize:

While the evening may seem typical, it’s one-of-a-kind. During the cocktail reception, guests are provided with an opportunity to collect autographs and speak with dozens of athletes and celebrities in attendance. Guests can also strike a pose with the athletes and celebrities, even take a few selfies! A silent auction featuring sports memorabilia, show tickets and more takes place during the reception. A formal sit-down dinner is followed by a live auction with several “priceless” experiences. One of the evening’s highlights is an original performance, produced by Olympic Figure Skating Champion JoJo Starbuck, featuring students of the Henry Viscardi School at The Viscardi Center  with appearances by some of the attending athletes and celebrities

Founded by Dr. Henry Viscardi, Jr., who served as disability advisor to eight U.S. presidents and became one of the world’s leading advocates, The Viscardi Center provides Pre-K through High School education, school-to-work transition services, vocational training, career counseling and placement, assistive technology and workforce diversification assistance to children, adolescents, and adults with disabilities and businesses. A global leader, it employs more than 300 professionals, including experts in education, human resources and technology.