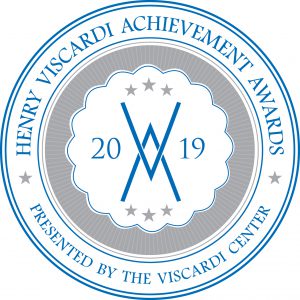 The Viscardi Center announced ten recipients of the 2019 Henry Viscardi Achievement Awards on December 5 at a ceremony at the Mutual of America building in New York City.

Drawing nominations from around the world, this year’s group is accomplished and diverse, representing Australia, Belgium, India, Pakistan, South Korea, the United States, and Vietnam. Recipients come from a variety of distinguished backgrounds, including academia, medicine, entertainment, technology, and corporate and non-profit sectors.

“Over the years we have had the humbling opportunity to recognize nearly 70 trailblazing men and women with disabilities from 20 different countries,” said The Viscardi Center’s President & CEO John D. Kemp. “This evening we proudly recognize ten international innovators, role models, and mentors dedicated to raising disability awareness worldwide.”

The 2019 Selection Committee was co-chaired for the sixth consecutive year by Robert Dole, former U.S. Senator, along with Sherwood “Woody” Goldberg, Esq., retired U.S. Army Colonel, Vietnam veteran, and Civilian Aide to the Secretary of the Army in Washington D.C.

Fmr. Army Major Jas Boothe is a speaker, filmmaker, and veteran with a disability who served in the U.S. Army for over 17 years. Profoundly impacted by Hurricane Katrina, homelessness, and cancer, Jas was compelled to launch Final Salute in 2005 to provide homeless women veterans and their children with safe housing. Due to her efforts and advocacy, Final Salute has raised more than three million dollars and supported over 5,000 individuals. Jas has received several awards and accolades for her leadership and community service, including Oprah Winfrey Standing Ovation, U.S. Army Chief of Staff Outstanding Civilian Service Award, People Magazine Hero Among Us, and CNN Hero.

Joseph is a combat-wounded U.S. Army veteran who now serves as an advisor to the Secretary of the Army. As a below-the-knee amputee, he has advised the past five Secretaries of the Army on the many issues faced by our wounded warriors. Joseph advises on the roles and capabilities of both Military and VA health care systems. Joseph also advocates for soldiers who have suffered severe physical and mental trauma as they navigate the healthcare and personnel systems to ensure they receive the best treatment and benefits. Since losing his leg, Joseph’s love for the sport of hockey has endured with his selection to play for the U.S. Amputee Hockey Team, which won the silver medal in 2007. The NHL has called upon him to share his experiences with their fan base and was recently named an NHL Ambassador for their “Hockey’s for Everyone” program.

As CEO of Miami Lighthouse for the Blind and Visually Impaired, Virginia has an outstanding record: the organization grew to serve 22,000 program participants in 2018 and its Charity Navigator rating moved from 2-stars to 4-stars. It has maintained that rating for 12 consecutive years, placing it in the nation’s top 1% most effective among the 9,000 other nonprofits evaluated annually. Several programs and services have been introduced under her leadership, including the Lighthouse Learning Center for Children™, a music production/sound engineering program, and a Low Vision Center for seniors affected by age-related eye disease.  A strong advocate for web accessibility for the blind, Virginia was commissioned to write an article entitled “Let’s Give the Blind Better Access to Online Learning,” Chronicle of Higher Education, May 8, 2011. She subsequently developed web accessibility consulting, led by two computer scientists who are blind, to ensure websites are ADA compliant.

As a polio survivor and wheelchair user, Kamran became driven from an early age to advocate for the rights of other young people with disabilities in Pakistan. At the Saaya Association of Persons with Disabilities, Kamran assists youth, many of whom may be living in isolation, by connecting them to activities and programs that promote independence, boost community involvement, and increase quality of life. In addition to spearheading several independent living training programs, outreach activities, and counselling sessions, his leadership has successfully prompted 20 local government and public facilities in Rawalpindi and Islamabad to become more accessible. Kamran is also an active member of the Pakistan Wheelchair Cricket team and has competed in international tournaments.

A polio survivor dedicated to advocating for the rights of people with disabilities in India, Abha serves as Honorary Counsellor for students with disabilities at UCMS & GTB Hospital, New Delhi and a member of the Sexual Harassment Committee at the Department of Disability Affairs, Ministry of Social Justice and Empowerment. With a firm belief that accessible ICT can advance opportunities for people with disabilities, she launched Cross the Hurdles in 2010 – the first-ever counselling/educational resource website and mobile app designed exclusively for people with disabilities. She also developed a free self-paced course in comprehensive sexuality education for adults and teens with disabilities. As a woman with a disability, much of her career focuses on empowering other women in the disability community to become more independent and take control of their health needs. She has authored several handbooks, including ‘Keeping You Abreast; A Handbook on Breast Cancer Self-Examination,’ and ‘Going with the Flow; Handbook on Menstrual Management & Hygiene.’

Halfway through his studies in medical school, Dr. Palipana’s life changed dramatically when he sustained a spinal cord injury resulting in quadriplegia. He went on to become the second person with quadriplegia to graduate from medical school in Australia and the first to become an intern in Queensland. As a result of his experiences as a person with an acquired disability, Dr. Palipana co-founded Doctors with Disabilities Australia to advocate for inclusivity in medicine. He is a current resident at Gold Coast University Hospital, lecturer at Griffith University, and research fellow at the Menzies Health Institute of Queensland, where he conducts studies revolving around spinal cord injuries. Dr. Palipana also serves as Gold Coast Health’s representative in the Australian Medical Association Queensland’s Council of Doctors in Training, and a scientific committee member of the Perry Cross Spinal Research Foundation and Ambassador Council at the Hopkins Centre. He was named Gold Coast Health’s Junior Doctor of the Year in 2018. He was awarded the Medal of the Order of Australia in 2019.

Chano became involved in the disability rights movement while advocating for campus accessibility as a university student in South Korea. After graduation, he continued to lead change in his personal and professional life, counseling clients with disabilities as a social worker and attending demonstrations in the fight for accessible public transportation. In 2003, he set up the Seoul Center for Independent Living, the third independent living center in the country dedicated to advancing disability rights. The Seoul Center for Independent Living accommodates a growing demand for independent living in response to shifting social/political views and policy. Chano’s team started the first Korean personal assistance services and translated and distributed several books that expanded the philosophy of independent living.

Ali is the first actress in a wheelchair to earn a degree from the New York University Tisch Drama Department, appear in a Broadway show, and receive a Tony Award. She won the 2019 Tony Award for Best Featured Actress in a Musical for her performance as Ado Annie Carnes in Oklahoma! Ali, who sustained a spinal cord injury in a car accident when she was just two years old, set her sights on becoming an actress and singer at an early age. After completing college, she was a finalist in on the reality TV show The Glee Project and debuted on Broadway in the 2015 rock musical revival of Spring Awakening. In addition to her acting and singing career, Ali devotes time to advocating for accessibility and disability representation in the arts. She has been named the headliner for The Viscardi Center’s 2020 Reach for a Star Luncheon, which benefits extracurricular activities and clubs at the Henry Viscardi School that help students with severe physical disabilities explore their talents.

As the Global Disability Inclusion Leader at IBM Belgium, Yves is on a mission to grow the population of employees with disabilities at IBM across locations in 170 countries and position the corporation as an inclusive thought leader in the market by engaging with clients and business partners from around the world. He started with IBM in 1992 and took on many responsibilities over the course of his career, eventually becoming an international strategist and spokesperson for IBM’s diversity and inclusion efforts. Yves’s global impact extends beyond his day job. He is the 2019 Chair of the International Labor Organization’s Global Business & Disability network, a member of the corporate advisory board of Disability:IN, an International Associate with Business Disability International, and an external collaborator at the University of Liege in Belgium. Yves also authored the book Turning Point – The Fall and Rise, which details his personal experience as a professional with an acquired disability and provides information on ways that others, including employers, can become more “disability confident.”

Yen is a tireless activist for the rights of people with disabilities in Vietnam, a social worker and disability educator for colleges, GOs, and NGOs with projects or programs on disability, and consultant for several disability-related community programs. In 2005, Yen founded the Disability Research and Capacity Development (DRD) Center based in Ho Chi Minh City to transform her community and empower people with disabilities to fulfill their education and employment goals. Under her direction, DRD later expanded its network to include 35 organizations in southern Vietnam, providing an array of services to thousands of individuals annually. In addition to her work at DRD, Yen serves as the Vice President of the Vietnam Federation on Disability. Yen was named one of Forbes Vietnam’s ‘50 Most Influential Women’ in 2019. She has received several prestigious awards and accolades over the years for developing life-changing resources for people with disabilities, such as the Ramon Magsaysay Award (known as the Asian Nobel Prize), Australia Leadership Award, the U.S. President’s Call to Service Award, and the Kazuo Itoga Prize.

Founded by Dr. Henry Viscardi, Jr., who served as disability advisor to eight U.S. Presidents and became one of the world’s leading advocates, The Viscardi Center educates, employs and empowers people with disabilities. It provides Pre-K through High School education (up to age 21), school-to-work youth transition services, vocational training, career counseling and employment placement, assistive technology, and adapted driver education to children, adolescents, and adults with a wide variety of disabilities. The Center also assists businesses in diversifying their workforces, as well as developing and advancing disability inclusive cultures in their workplaces.