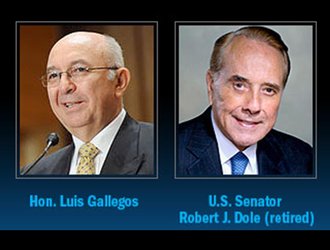 The Viscardi Center today issued a “Call for Nominations” for the 2014 Henry Viscardi Achievement Awards, which pay tribute to exemplary leaders in the disability community who have had a profound impact on shaping attitudes, raising awareness and improving the quality of life of people with disabilities. The Award recipients will be announced on Monday, May 5, 2014.

The Henry Viscardi Achievement Awards were developed to honor the legacy and vision of the New York-based Center’s founder, Dr. Henry Viscardi, Jr., who himself wore prosthetic legs. As one of the world’s leading advocates for people with disabilities, he served as a disability advisor to eight presidents, from Franklin D. Roosevelt to Jimmy Carter.

“People with disabilities are an integral fabric in our communities in the United States and around the world.  We range from leading thinkers and innovators to every day citizens,” said John D. Kemp, President and CEO of The Viscardi Center. “Despite our significant contributions, people with disabilities continue to face considerable barriers. Our Henry Viscardi Achievement Awards are designed to recognize the tireless efforts being made on a daily basis to better integrate people with disabilities into everyday life and allow every person to achieve to their fullest potential.”

Individuals of any age, with any type of disability, are eligible. The Awards will recognize individual, academia, athletic, community, government, nonprofit, military, corporate, and business leaders who are working to improve the lives of people with disabilities. Nominations are being accepted until March 15, 2014.

Click here for more information about the Awards and to submit a nomination.