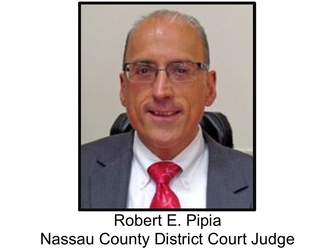 A Judicial Replication Induction Ceremony was held at Henry Viscardi School at The Viscardi Center for one of its alumnus, Robert E. Pipia, on January 20, 2015. Pipia was elected to Nassau County District Court Judge last fall and officially inducted in January.  In addition to the Henry Viscardi School (HVS) student body and staff, the ceremony was attended by family, including Pipia’s wife Maggie a teacher at HVS for 30 years, Viscardi Board members and alumni, and local officials including the Supervisor of the Town of Hempstead Kate Murray, North Hempstead Town Supervisor Judy Bosworth, Assemblyman Edward Ra, and Councilman Peter Zuckerman.

“We wished Dr. Viscardi could have been there to witness the ceremony himself. Rob certainly has done him proud and achieved everything he had hoped the students who attended the Henry Viscardi School would when he founded it nearly 53 years ago,” said John D. Kemp, President and CEO, The Viscardi Center. Henry Viscardi School educates students with severe physical disabilities, pre-K through high school (up to age 21), who are often medically fragile.

The U.S. Marine Corp Color Guard opened the ceremony. During the ceremony, Kemp said, “It is a proud day here at The Viscardi Center and School. What an honor it is for all of us to witness this induction ceremony replication and to personally congratulate one of our own. It’s a valuable educational experience for our students to see just how far an HVS graduate can go, and it’s also a strong reminder of the importance to exercise our right to vote when you become of age. Remember, you can take an active role in shaping our national and local governments’ leadership to ensure your personal rights are being upheld.”

Kemp than spoke directly to the Henry Viscardi School students, “Think big. That’s what many of us in your lives, including your parents, friends, teachers and therapists, have been telling you. Think big, because that’s exactly what Judge Pipia has done since the day he entered this school, and look at all that he has accomplished. Think big. Study hard. Shoot for that lofty job. Set your sights on holding leadership positions throughout your life whether it be here or on a Board of Directors one day. Build a good, fulfilling, meaningful life. Simply, think big. And if you need a reminder… call on Judge Pipia. He is a role model and mentor for you. Tap into his knowledge. Speak to him about his experiences. Seek his guidance and advice. Because, like all of us who work alongside you every day, Judge Pipia too, wants you to think big.”

Honorable Thomas Adams and Norman St. George reenacted the swearing in. After explaining the role of a District Court Judge, Honorable St. George gave high praise for Pipia. “Rob has done more in his first week than others do in a month.”

Following the mock induction, Judge Pipia addressed the audience, noting the staff of Henry Viscardi School always encouraged him to be successful. He also had many kind words about the Center’s founder. “Dr. Viscardi was similar to Dr. Martin Luther King, Jr. and a driving force in this country for the civil rights of people with disabilities. If Dr. Viscardi didn’t start the road in the 20s through the 40s, and have relationships with the U.S. Presidents, and found Henry Viscardi School, I don’t know if you ever get an Americans with Disabilities Act (ADA).”

As the ceremony came to a close, Pipia had some words of encouragement for the students, “Continue the Viscardi tradition. Work harder and longer. You’re more resilient than the average person. See your goals through.”

About Robert Pipia: Robert E. Pipia was born in Queens, New York, and at the age of 5 was diagnosed as having a Neuromuscular Disorder. At the age of 12, his family relocated to Elmont and he began attending what is now known as Henry Viscardi School. During his high school years, Rob was very active in academics and extracurricular activities, including the National Honor Society and Student Council. In addition to receiving honors in mathematics, he was awarded various athletic school honors and in his senior year was recognized by Sports Illustrated for his athletic achievements. Rob was the salutatorian of the Class of 1982.

Following graduation, he attended the State University of New York in Albany and earned a Bachelor of Science Degree in Accounting. There, he served as President of the University Action for the Disabled (UAD).  UAD developed services to aid students with physical disabilities which enabled them to complete their college education. It also educated the university and the surrounding community as to the abilities of those who were physically disabled.  During this time, Rob also served as a consultant to University Administrators and as a result of his efforts, he received a citation from the Vice President of Student Affairs for “outstanding service to the disabled community.”

In September of 1985, he was elected to the Central Council of the Student Association to represent 5,000 off-campus students. Rob’s interest in sports continued in college. He captained the wheelchair hockey team and conducted floor hockey clinics for high school students who were disabled at the New York State Wheelchair Sports Exposition.

After an unsuccessful job search in the field of public accounting after graduation, Rob attended Hofstra Law School. While in law school, Rob continued to be involved in community programs benefiting people with disabilities and school activities, serving in multiple leadership positions. During his third year of Law School, he was selected to be a member of the Hofstra Constitutional Law Clinic, practiced as a student attorney and was involved exclusively with the Civil Rights Case CARECEN vs. City of Glen Cove, the first of its kind to be settled through ADR or alternative dispute resolution. For this work, Rob received the 1992 Clinical Law Award.

Rob passed the February 1993 Bar Exam and was admitted to the Bar in July of 1993, only after he was forced to file a federal suit against the New York State Board of Law Examiners for violations of the Americans with Disabilities Act when he was denied reasonable testing accommodations. This action brought to light the serious patterns of discrimination which the Bar Examiners had followed and sparked a federal investigation by the United States Justice Department.

About The Viscardi Center: Founded by Dr. Henry Viscardi, Jr., who served as disability advisor to eight U.S. Presidents and became one of the world’s leading advocates, The Viscardi Center educates, employs and empowers children and adults with disabilities. It provides Pre-K through High School education, school-to-work transition services, vocational training, career counseling and placement, adapted driver education, assistive technology and workforce diversification assistance to children, adolescents and adults with disabilities, and businesses.